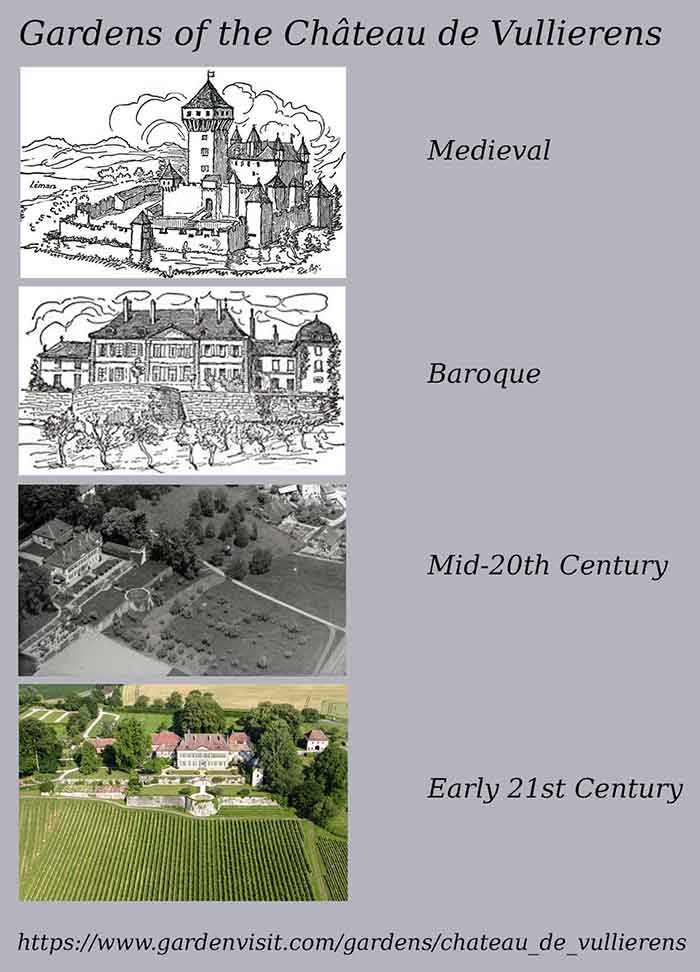 The gardens of Chateau Vullierens have been influenced by the styles of several periods in garden history: Medieval, Baroque, Romantic and Modern

We are pleased to welcome the gardens of the Château de Vullierens to the Gardenvisit guide. Just inland from Lac Lemen (Lake Geneva) it looks south to the Alps and Mont Blanc. Four important styles of garden design have influenced the layout. When first built, as a strongly fortified house, it was set in a classic medieval walled enclosure. One can speculate that as with many medieval gardens, it was used for growing sweet smelling and medicinal herbs. Perhaps it had a turf seat and a rose bower in which the ladies of the house could enjoy the sun, do their embroidery and listen to minstrels.
When rebuilt, as a baroque style ‘Little Versailles’ the old uses are likely to have continued. The ladies and gentlemen of the house will have walked with family and guests on the elegant terrace, stopping to enjoy the sun and watch their children and pets play on the grass. In the nineteenth century, again following Europe-wide fashions, the gardens will have taken on more of a horticultural flavour and, to use English terms,  in a gardenesque and mixed styles.  In the mid-twentieth century Doreen Bovet, the owner’s American wife, began the fabulous iris collection.