The placing of benches and trees seems to bring out the worst in public authorities. Having created good SLOAP (= Space Left Over After Planning) they try to ameliorate the problem by calling up the landscapers and asking them to stick in a few benches and trees. Damn them! The correct policy is to treat urban trees not as ‘ornaments’ but as part of a multi-objective urban forestry programme. The objectives could and should include:

The below photograph shows Bryant Park in New York City. It was re-designed in the 1980s using ideas drawn from the greatest landscape planning theorist of the twentieth century: William H Whyte. The photographs shows urban seats which are NOT fixed in position, paving which is NOT sealed and trees which deserve the accolade ‘urban forestry’. 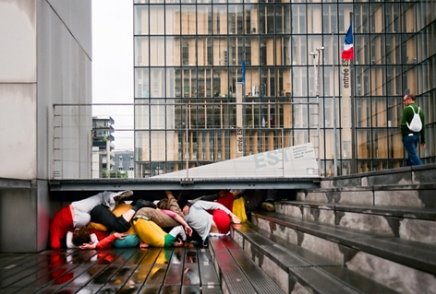 The question of urban density seems to keep being asked anew every five years or so. It is said that in 1800 only three percent of the world’s population lived in cities.
That means many of us have become used to tighter spaces very quickly in evolutionary terms. Do we need to tie ourselves in knots to fit into designed spaces? What does this mean for the design of our cities? What is the relationship between green spaces and built spaces?

Probably not, but (1) London can be a grey old place (2) red is London’s emblematic colour (3) Tower Bridge is one of the best-known London icons (4) the colour would appeal to Chinese tourists (5) from time to time, one should ‘paint the city red’ (6) I had a red toy model of Tower Bridge when I was 5 years old have always been disappointed by its present colours. Designing a city is a complex business. There are commercial and development pressures to be considered. But a city is more
than just a continual investment of capital and occupation of new space. It has an identity. Sometimes only a local one. But sometimes
a global one.

Sometimes a remembered one.

What gives a city its identity? Consider how much of your city can you change and still have your city recognised for the qualities that others
currently value. Ask yourself what attributes are different to other cities and what are the same.

If the skyline was to change which buildings would you miss?

Looking at London from the Eye gives a whole new perspective on the city. Another view from the Eye enables the viewer to ask ‘how green is my city?’ Some of the answers might surprise.

The French farmer’s protested their financial plight in a charmingly French manner by greening the Champ-Elysee.

Another unusual example of the trend towards green is the Lost House of Paris. The occupants literally live within a greenery covered house. To travel green in the city of romance you simply phone a ‘Vectrix’ taxi.

As Pierre Patel’s 1688 painting of Versailles (below)  shows, axes can be green and they can be canals. And canals can be used for transport.  Civic leaders need courage, imagination, wisdom – and a wealth of ideas from the design professions.