Hard to know what I would write if the Sunday Express asked me to do a few hundred words on garden design but I can put some helpful advice in one sentence: ‘don’t take advice from Alan Titchmarsh‘. The concept of ‘style’ on which his article rests is of use in understanding garden history and restoring historic gardens but it often leads amateur designers astray. Or maybe the problem is more basic: to do a design you have to be a designer. Many owner-designers have proved that a design training is not essential – and some professional designers have proved that it is not sufficient. But, somewhat tautologically, you do have to be a good designer to produce a good design – and a fixation on styles or ‘stylish gardens’ is unhelpful.

Tim Cawkwell’s 78-page book Tivoli Companion is, scholarly, enjoyable and puzzling in equal measure. The puzzle, for a reviewer, is the intended audience. I guess I know more about Tivoli than most general readers but a good deal less than those with specialist knowledge of Italian garden history. So perhaps the guide was written for people like me. But, are there many other people like me with an in-between knowledge of Tivoli?
The title A Tivoli Companion is well-chosen, reminding one of Georgina Masson’s Companion Guide to Rome. The Introduction is explicit that ‘this is not a guidebook that will tell you where to stay and what to eat’ but also states that ‘Tivoli is a rich enough place to have its own guidebook’. So is it a ‘guidebook’? Not really. The contents page identifies the main section of the text as an ‘Essay’ and this is the truth of the matter. It is akin to an extended magazine article. About half the text is about Tivoli’s three famous gardens: Hadrian’s Villa, the Villa d’Este and the Parco Villa Gregoriana, with their history and character dealt with rather glancingly. The author’s photographs tell us more but not as much as they could have done with more consistent and informative captioning. The book has only one plan. Hand-drawn and with almost unreadable labelling. But the information is useful and interesting: ‘Tivoli and R. Ariene in 17th century showing channel dug under the town to the NE corner of Villa d’Este’.
Just possibly, the puzzling aspect of the Companion is explained by the information about the author on p.78. Most of his writing has been about cinema. His literary approach is filmic. I am pretty confident that Calkwell’s Companion is, to date, the most extensive discussion of Tivoli’s graffiti in the English language,

The Gardens of Fletcher Steele by Priscilla Elliott

I opened this short book with some puzzlement, wondering why the author wrote it when a longer book had been published in 1989 and revised in 2003 (Fletcher Steele, Landscape Architect: An Account of the Gardenmaker’s Life, 1885-1971 Robin S. Karson). Elliott must surely have read Karson’s book but does not list it in her bibliography.
The explanation of Elliott’s approach lies in her title: her focuses is on the gardens Steele designed. They are explained with quotations from his letters and grainy old sepia photographs from the Library of Congress Archive.
Fletcher Steele’s career has parallels with that of Thomas Mawson (1861-1933). He was born 28 years after Mawson and the comparison is interesting. Both were strongly influenced by the Arts and Crafts movement and by its transformation into another Italian revival. In terms of design quality, the work of both men was less-inspired than the work of Jekyll and Lutyens. But in one respect Steel’s work is more interesting and important than Mawsons. Steele was interested in the modern world and keen to draw upon them. Mawson ridiculed the Art Nouveau style. Steele was attracted by the currents of Art Deco and Art Nouveau and interested in Abstract Art. This helped him achieve something Mawson never managed: a design classic – at Naumkeag – which Elliott sensibly illustrates on the cover of her book.
Though she lists and documents Steele’s gardens, Elliot is disappointingly quiet on stylistic issues and on Steele’s place in the histories of garden design and landscape architecture.
The Gardens of Fletcher Steele, American Landscape Architect by Piscilla Elliott (2014) is published by Guysborough Press 72 Cottage Street Melrose MA 02176

Good writing and good photography are real assets for garden books. Great Gardens of London was produced by a skilled investigative journalist working with two expert photographers. Victoria Summerley explains that the book is ‘aimed at residents and visitors alike’. Yes. But it is not particularly aimed at garden visitors. Or should I say ‘it is not aimea at all garden visitors’. The book’s first garden is that of the Prime Minister’s official London residence: 10 Downing Street. Doubtless it has been seen by many important visitors to London but I doubt if many travellers on omnibuses from Clapham are to be counted among their number. 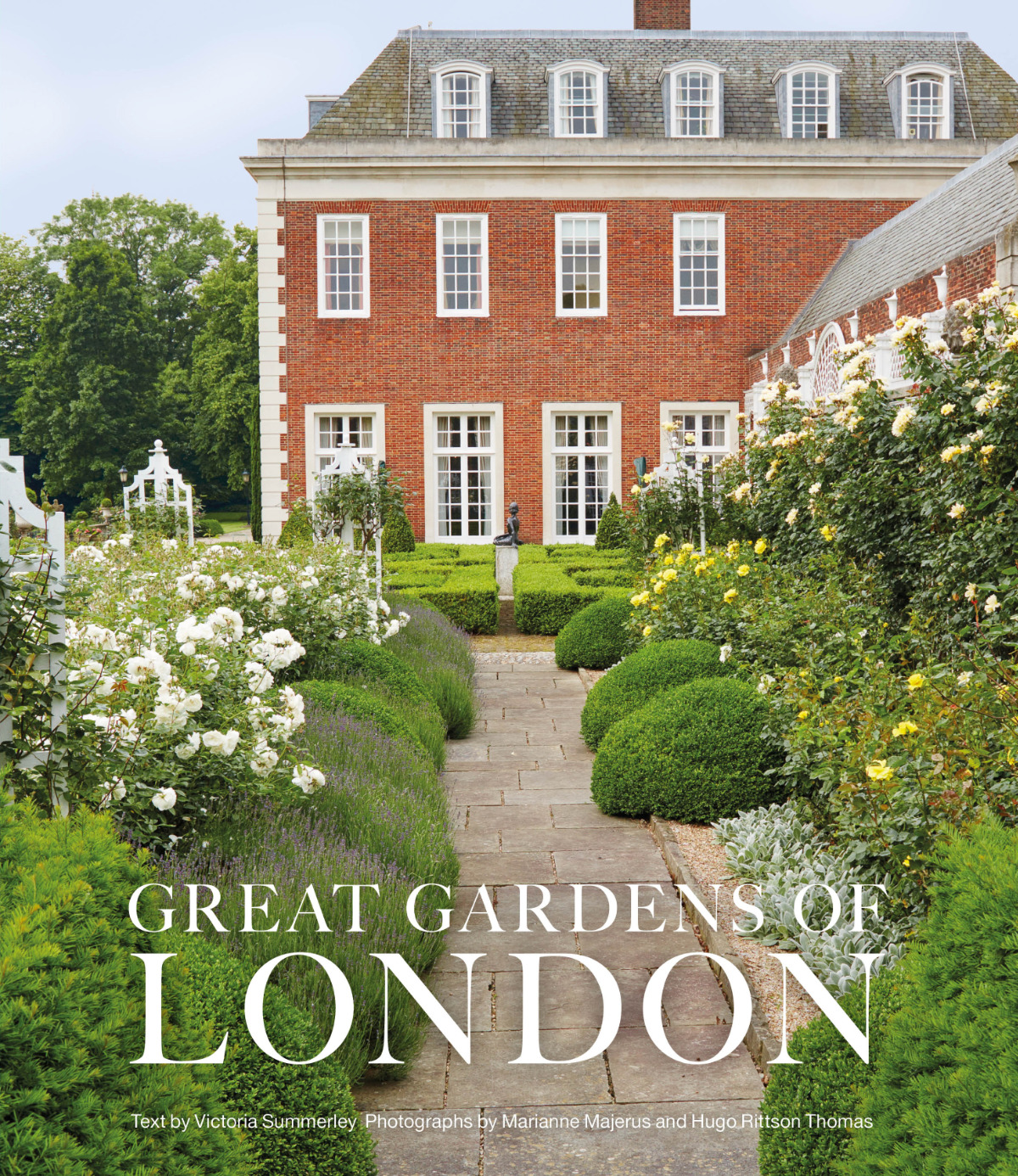 The book has a map and appendix with details of which gardens can be visited: 13 of the gardens are never open and 17 are open in various degrees. I did not know that Downing Street lets in a few visitors by ballot. Another appendix suggests more gardens to visit.

America is said to have less of a class system but Winfield House, second in the book and the American ambassador’s London residence, is not part of the tourist circuit. No matter: the book is a great opportunity to see and read about these important gardens.

I don’t know whether to be pleased or sorry that PM Gordon Brown’s wife (Sarah) introduced raised vegetable beds to Downing Street. Good to think of the happy couple doing something useful with their time but I worry about how the beds fit into the garden aesthetically and about why they wanted the beds to be raised. Did they use railway sleepers? Raised beds are fashionable, and possibly a Tory idea, but my experience is that unless your ground is badly drained or polluted, or you want to avoid carrot fly, vegetables do better in unraised beds and need less watering. I’d like to know whether Downing Street harvests rainwater for its garden – or does it make unsustainable use of tap water? I was interested to read that Margaret Thatcher commissioned the Downing Street rose beds and that they contain a rose named after her. Great that it survived the dark age of Blair and Brown, much as the nearby statue of Charles I survived the Civil War. Do they use strips of iron to protect the adjoining lawn?

Sustainable gardening is high on the agenda for Winfield House. Even memos are composted. Just think how much Wikileaks trouble would have been avoided if the US had stuck to composting. Obama liked Winfield garden so much that he joked about wishing he had been Ambassador to London instead of President.

The gardens and parks in the book which are accessible to the public are well worth visiting, though most are flattered by the excellence of the photography. Eltham Palace Garden is an interesting place but, despite continued efforts by English Heritage, I find the quality of the gardens disappointing. Summerly sees Eltham as the product of ‘two dynasties’: the Tudors and the Courtaulds. But one does not sense their tastes in the design. It looks like a municipal park. English Heritage say the aim is restore Eltham to the style of the 1930s and they have used archive material to this end. Perhaps the problem is that the Art Deco style, which worked well for rebuilding Eltham Palace, was never resolved in English gardens. Fletcher Steele, as he showed at Naumkeag, could have done a much better job.

The garden of Horace Walpole’s Strawberry Hill was ‘pretty dreadful’ before the Strawberry Hill Trust began a £9m restoration of the house and garden in 2009. Generally, I think individuals and trusts do a better job of this kind of work than bodies, like English Heritage, with national responsibilities. The Strawberry Hill Trustees have the wisdom to run a volunteer programme. Why don’t all publicly owned green spaces do this?

The next chapter is on Hampton Court, where much garden history research and restoration has been carried out. I am sorry that the book does not use historical drawings or plans but can understand that they might be thought unsuitable for a non-specialist readership.

Moving on, I was very pleased to find a chapter on the Downings Road Floating Gardens in Bermondsey. The wretched, unimaginative, blinkered bureaucrats of Southwark Council have been trying to get them removed for years. Their inclusion may help those who have long campaigned for their recognition and protection.

The book’s 30 gardens are categorised into five chapters. Some are unconvincing as groups. Chapter 4, on roof gardens, is a good group and a pleasure to discover. My dream is that London will become a Roof Garden City. This chapter shows what is possible. Most roof gardens are, understandably, not open to the public. But they are great places and, unlike most of the design styles represented in the book, they look contemporary. Jane Brown wrote of ‘the gardens of a golden afternoon’. Much though I like them, that afternoon continues to linger on beyond its natural lifespan. What London needs is a wealth of roof gardens. Unlike many capital cities, including Washington, Delhi, Beijing, Tokyo and Moscow, London has a climate which is very well suited to the enjoyment of roofs – providing they are well planned and well designed. I hope the second edition of Victoria Summerley’s Great Gardens of London will include the University of Greenwich Roof Garden in Stockwell Street. And if space can be found, I’d like to have more discussion of garden design styles.

Chipping Campden is a ‘garden town’ in the Cotswolds

Chipping Campden is a small market town in the Cotswolds, described as ‘the most beautiful village street now left on the island’ (G.M. Trevelyan English social history, 1944). The Cotswolds is an area of gently rolling hills famous for its sleepy villages, fine gardens and concentrated ‘Englishness’. The June tour from Cotswold Walks starts with 3 days visiting its private gardens. They are open (for charity) only for a week in June. After that the guests move to another Cotswold town (Barnsley, Bibury or Cirencester) for visits to other gardens, including:

Hidcote Manor  was designed and created by an American, Major Lawrence Johnston and examplifies the Arts and Crafts style of garden design with well-designed  garden rooms and linking spaces.

Rockcliffe garden was designed by its owner, Emma Keswick and her taste shines through the the design.

Barnsley House Garden was owned and designed by Rosemary Verey

Highgrove is the country home of HRH Prince of Wales. He has had a remarkable success as owner, patron, designer and part-time gardener.

Asthall Manor garden is owned and designed by Julian and Isabel Bannerman, who also help Prince Charles with the design of Highgrove.

This blog has covered both designed gardens and landscape architecture for 7 years but have decided:

I have not changed my mind about the relationship between the two subjects (please see What is the difference between garden design and landscape architecture?) but not everyone shares my interest in both areas of work.