The co-ordinated development of the South Bank between Westminster Bridge and Southwark Cathedral is a 20th century phenomenon, much of the open space belonging to the 1960s and 1970s. None of the open space is outstanding, and some is notorious for its inhospitable environment. The Queen's Walk, a pedestrian route, is embellished with traditional dolphin lamp-posts and has fine views to the Victoria Embankment with its lawns and trees. Starting from the Westminster Bridge end, the landscape is dominated by County Hall, the first and, some would say, still the only wholly successful building in terms of its relationship to the river. Just upstream, as part of the redevelopment of St. Thomas's Hospital, is a notable roof garden dominated by a striking fountain sculpture by Naum Gabo. The garden is successful both when viewed from above and as a series of well-planted spaces for lunch-time relaxation. (Landscape Architects: York, Rosenberg, Marshall). Beyond County Hall are the Jubilee Gardens. In June 2005 West 8 were selected as landscape architects to re-design Jubilee gardens as an organic, lush and green park with undulating hills.

The trees in front of the Jubilee Gardens were planted by the GLC in 1966 in very large and well prepared tree pits. In 1978 they were thinned from 10m spacing to 16m and have grown remarkably well. The space around the London Eye has been intensively used since 2000. From County Hall to Hungerford Bridge, the landscape is dominated by the Shell complex with its muddled landscape spaces, and by the concrete walkways surrounding the Royal Festival Hall and the Hayward Gallery. Apart from the riverside itself, only one space deserves mention, namely the Shell frontage to Waterloo Road roundabout, a simple, elegant solution to an awkward, sunken space. Beyond Waterloo Bridge, the Queen's Walk continues towards, but does not yet connect through to Blackfriars Bridge. 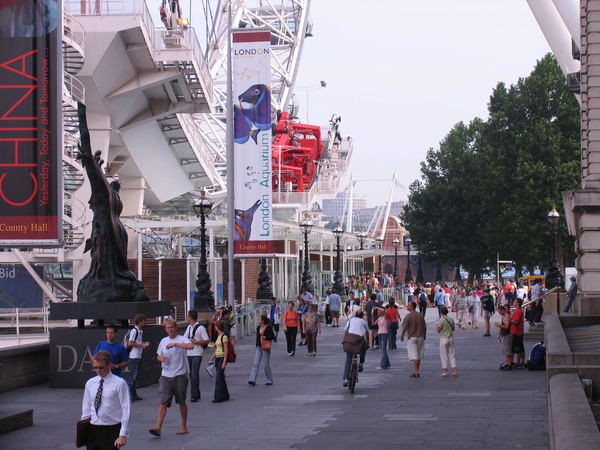 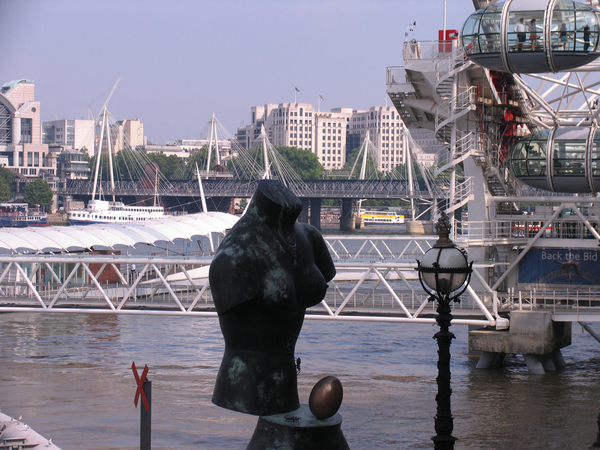 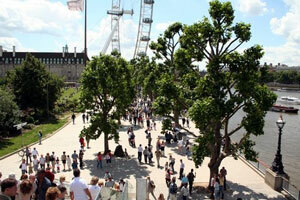 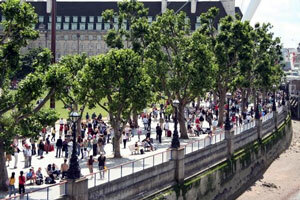