The Queen's Walk follows the south bank of the River Thames from Lambeth Bridge to Tower Bridge. The idea grew out of Patrick Abercrombie's 1943-4 County of London Plan. As shown on the map, Abercrombie proposed that much of this land should be converted from industry to Public Buildings, Business and Public Open Space. The 1951 Festival of Britain led to the first section of the walk, running east from Westminster Bridge. A more extensive walkway was conceived as part of the 1977 Jubliee Walkway, to mark the Silver Jubilee of Queen Elizabeth II in 1977. The walk was completed with the opening of London Bridge City c.1990. In 1996, the Queen's Walk became part of the Thames Path national trail through London. With the opening of the London Eye and the Millennium Bridge (connecting Tate Modern to St Paul's Cathedral) the volume of pedestrian traffic on the Queen's Walk increased dramatically. Most of the route can also be used by cyclists.

The Queen's Walk is part of the Dolphin Zone, a section of the Thames riverside which receives special design consideration. The name comes from the Dolphin lamp standards - but the  'Dolphins' are actually a pair of sturgeons. The lamps were designed by George Vuillamy for the Metropolitan Board of Works and modelled by James Mabey. Alternate lights have either an inscription to Queen Victoria or the dade of construction. The original Dolphin Zone (made in the 1870s) was the Albert Embankment and the Victoria Embankment. The London County Council extended this zone along the South Bank in 1964. 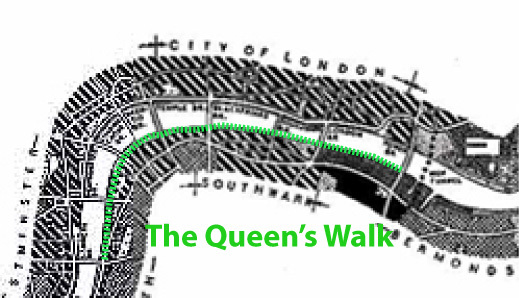 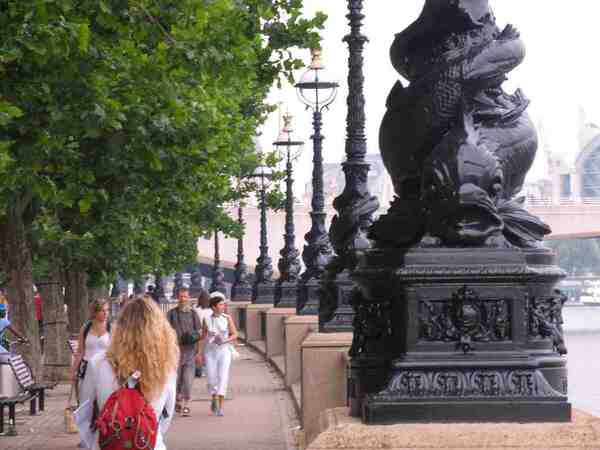