Reviews of garden ornament and sculpture

'Ornament is crime' declared Adolf Loos, a pioneer of abstract modern gardens. But even fellow modernists soon rejected this approach to garden ornament. They began to place abstract art in modern gardens, connecting with a 4,000 year-old approach to gardens and ornament. In Ancient Egypt, statues of gods were placed in temples and temple gardens. In Ancient Greece, statues were placed in sanctuaries and sacred groves, as objects of veneration rather than ornament. The Romans transported many Greek statues to Rome and made copies of those they dared not move. But in Roman gardens the statues were used as garden ornaments rather than religious symbols - and the Roman approach to garden ornament continues to dominate popular taste in European and American garden ornament. Every large garden store has a stock of copies of copies of Roman copies of Greek urns and statues. The most popular dieties, with their Greek names (their Roman names in brackets) and their symbolism have been: 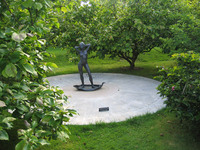 Statue in the Magnolia Garden at Penshurst Place 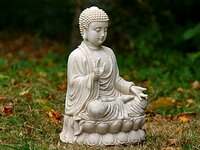