Somerset House was built on the site of a Tudor Palace (designed in 1547 for Edward Seymour, Duke of Somerset). There was an important renaissance garden between the house and the Thames (from which a fountain survives, in Bushy Park). The present house, designed by Sir William Chambers in 1775 was conceived as 'a place of national splendour' to house public offices, including the Navy Board and the three learned societies (the Royal Academy, the Royal Society and the Society of Antiquaries). Somerset House now contains a branch of St Petersburg's Hermitage Museum, the Courtauld Institute of Art Gallery, the Gilbert Collection - and Britain's Inland Revenue. There is still a south-facing terrace (now used as a cafe) but it is separated from the River Thames by the Victoria Embankment (containing a road, a railway and a trunk sewer). The internal courtyard of Somerset House was, disgracefully, used as an Inland Revenue staff car park for many years (this used to remind one of the Vatican's Belvedere Court - still used as a staff car park). Today the Somerset House court is used by dancing fountains in summer and ice skaters in winter. This is excellent.

The lowest level of Somerset House, inside the old watergate, has an excellent audio-visual display of history of the garden and landscape and architectural history of the site. You see its transformation from open country into its present form. You see a Tudor Palace and garden (completed in 1553), then a renaissance palace (designed by Inigo Jones after 1609) in which Oliver Cromwell died, to be followed by the present building (designed by William Chambers). Old buildings and gardens sink into the ground. New buildings and gardens arise to take their place.  It is a great way of following the history of renaissance landscape architecture in England - and Somerset House has the finest example of a renaissance square in Central London, paved like Italian squares, and now used by dancing fountains and playful children. 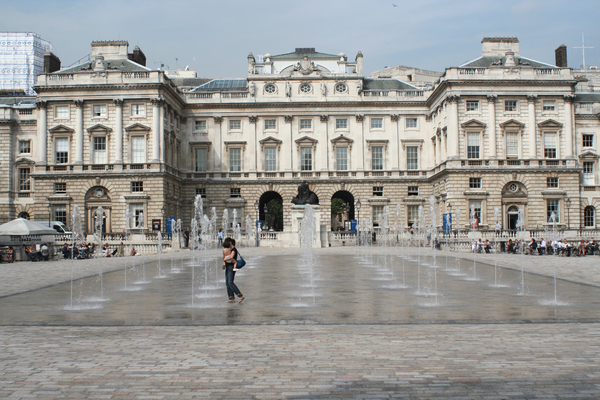 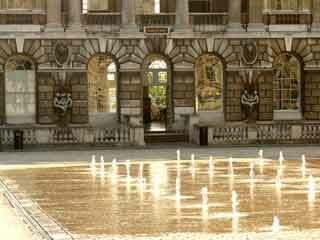 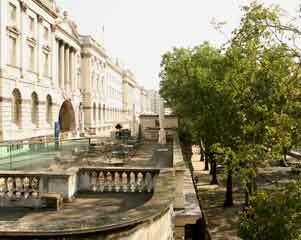 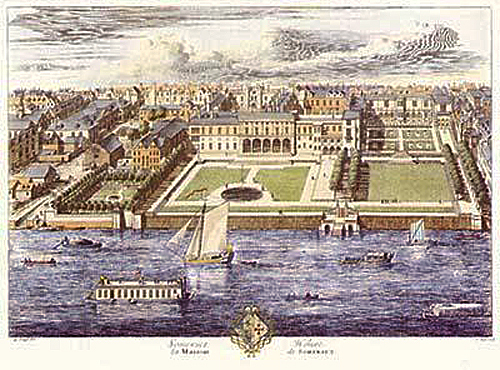 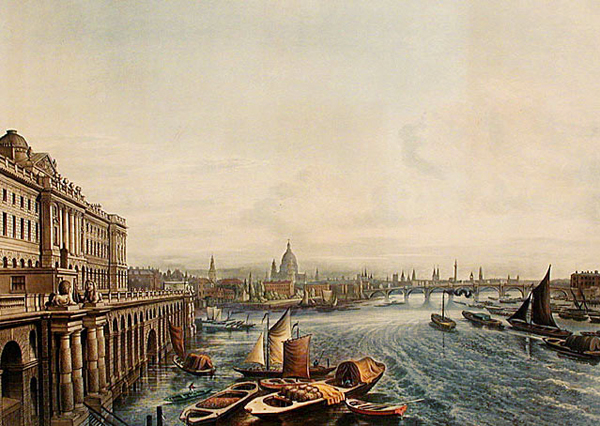 The audio visual display in the Old Palace Exhibition is accessible when there are exhibitions on display in the Embankment Galleries. To reach the display from the Strand entrance you need to walk across the courtyard, through the central doors into the South Wing, you will then be in the Seamen’s Hall. From the Seamen’s Hall turn left and then either take the lift down or go via the Stamp Stairs down to Embankment Level, once on Embankment Level turn right and follow the signs arrows for the Embankment Galleries.