Mentuhotpe's mortuary temple is a good place to begin the history of garden design as a fine art. Inspired by Osiris grave, the temple precinct was made below the Western Mountain where the edge of the Sahara Desert touches the Nile Valley. Thebes, now called Luxor, was the religious capital. Egyptians lived on the east bank of the Nile and were buried on the west bank, in 'the city of the dead'. Metuhotpe II reunited Upper and Lower Egypt, inaugurating an era of great cultural achievement, known as the New Kingdom. He ruled for 51 years (2046 BCE – 1995 BCE). A ramp, a platform and his tomb chamber survive. In the forecourt, 100m wide and 200m long, one can see the mud pits in which a grove of sycamore-figs and tamarisks grew. Rows of sycomore figs and tamarisks were planted beside the ramp. A processional route, 33m wide, extended 1000m towards the Nile. It was paved with mud bricks and screened by walls. The temple compound was enclosed by white-plastered walls with the gate marked by towers. Metuhotpe's temple inspired and adjoins the great Temple of Queen Hatsheput. They are unlike any other Egyptian temples. 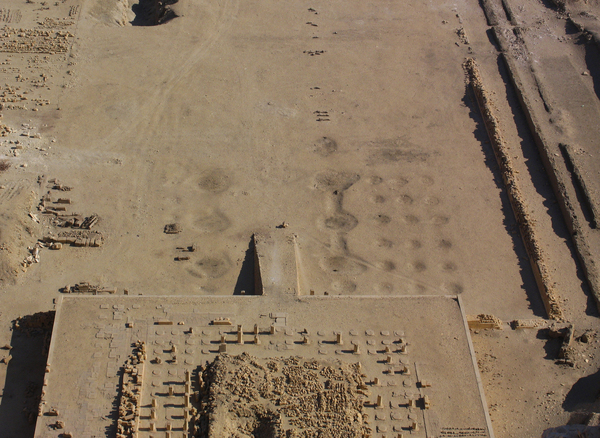