Hatshepsut's temple is the most ancient masterpiece of western landscape architecture. Her temple and its setting are one. The temple was known as Djeser-Djeseru 'Holiest of the Holy' to the Ancient Egyptians and is now known as Deir el-Bahri, 'Monastery of the North' after the Coptic monastery which used the site from the 5th century to the 19th century AD. Hatshepsut (also known by her throne name Maat-ka-Re, 'Justice is the soul Re') ruled from 1479 to 1458 as Queen of Egypt and 'God's Wife' (high priestess) of Amun. As became common in the New Kingdom, Hatsheput's mortuary temple and tomb are in different locations. Her tomb, where the treasure lay, is the oldest dateable tomb (KV20) in the Valley of the Kings. A mountain path leads from the desolate valley to her temple on the edge of the Nile Valley agricultural land. The temple, designed by Senenmut, governor of the domains of Amun, in co-operation with the chief treasurer, Djehuty who recorded that he 'acted as chief, giving directions, I led the craftsmen to work in the works of Djeser-Djeseru'. The temple was carved from living rock. There are three great rectangular courts, connected by ramps and commanding extensive prospects of the valley. A serpent rail with a falcon's head followed the ramp. No trees or shrubs survive in the temple compound but archaeological investigations have revealed evidence of tree pits in the lower court. They formed a sacred grove which contained two T-shaped pools abutting the central path. Traces of papyrus were found when the pools were excavated and tree pits, dug into the rocky ground and filled with Nile mud, surrounded the pools. The pools may have been used for rituals connected with plants and animals. The Book of the Dead (Chapter 186) shows Hathor, as a cow, coming from a sacred mound int a clump of papyrus, representing the margin between life and death. The sycomore fig was her sacred tree. Hathor was the Goddess of the Western Mountain and a chapel was dedicated to her.The middle terraceï¾… The top terrace, which contained the inner sanctuary, had reliefs of Amun's sacred lettuces in a grid of beds. Their milky sap symbolised the semen of the fertility god and were thought to be aphrodisiac. A relief shows an expedition to 'the land of Punt' [Somalila] to collect incense trees and thus provide Amun with resin. The trees arrived in baskets and were probably Myrrh trees. They may have been grown in pots on the terraces. A processional route, used for the Festival of the Valleys, led to the Nile and was lined with sphinxs, representing Hatshepsut. They were placed at 10m intervals and were 3m x 1m in size. Napoleon's experts saw traces of their positions, which have not disappeared. Djeser-Djeseru is a deeply symbolic place. To it makers, the symbolism emphasised the legitimacy of a female pharaoh, as a daughter of a great king (Tuthmosis I) and incarnation of Amun-Re. To us, it is a superb temple layout, integrating site, symbol, art, architecture and function. 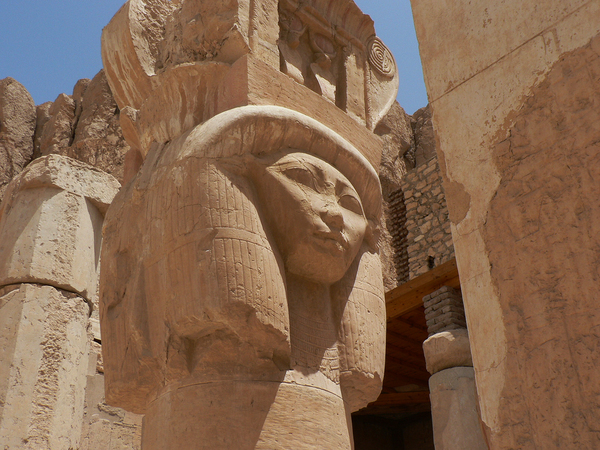 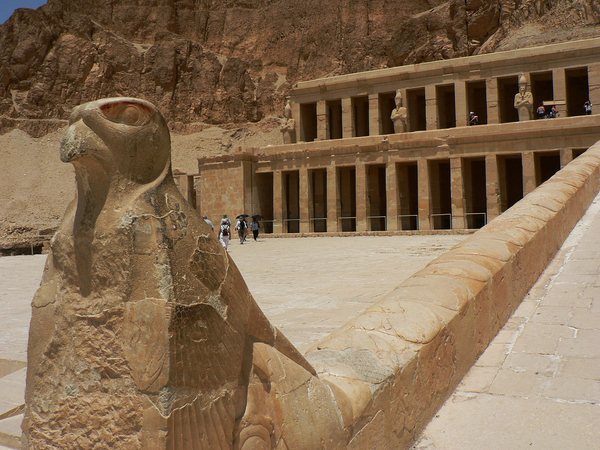 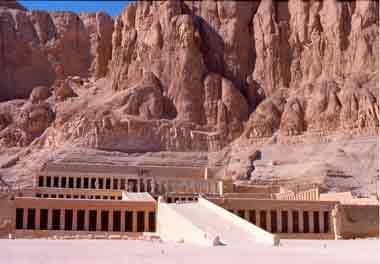