The Red Fort (Lal Qila), which protects a palace, is the largest survival of Shahjahanabad. Most of the rest has been re-built and is now called Old Delhi. The area was planned under the supervision of Shah Jahan as an integrated fortress and palace, much as the palaces of Sargon and Sennacherib, and the Alhambra, had been. The fortified outer wall, from which the modern name derives, was made of red standstone and many of the palace buildings within the wall are of white marble. The chief designer, Amad Lahwri, also designed the Taj Mahal building and garden. Shahjahanabad can be viewed as a Paradise Garden converted into a city plan. It has a series of great courts with colonnades, arcades, gateways and numerous buildings. The pavilions for the emperor and the zanana are on terraces along a canal by the former river bank. Kanbo wrote that 'it is a garden of perfect freshness and pleasantness, so that the whole paradisical ground from one end to the other because of its lush vegetation has outshone the green sky, and its sight is presented to the eyes of the beholder as the highest paradise'. Though connected by a canal the riverfront gardens had individual names: the Bagh-e Hayar Bakhsh, the Imtiyaz, the Bagh-e Angur and the Jahanara. The Bagh-e Hayar Bakhsh (Life Bestowing Garden) was the largest of these gardens and much of it survives. It had a waterfront terrace and a very large char bagh with water channels. The palace buildings had cypress-like columns and were themselves conceived as symbolic gardens. They had water channels and floral decoration. The Red Fort was a symbol of Shah Jahan's lush, floral and fruitful reign: he lived in a paradise garden and aimed to create a paradise on earth. 'If there is a paradise on earth, this is it'. Few of the water features are operational and the planting has been badly neglected. See chart of Asian garden design styles. 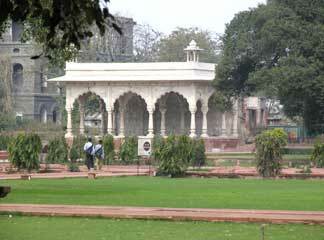 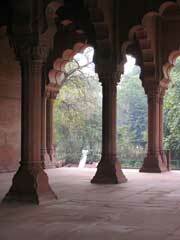