The city of Khorsabad was built by King Sargon II, who reigned from 722 to 705 BC, and abandoned when he died in battle. Sargon's palace ( Dur Sharrukin) is an immediate predecessor of Sennasherib's Palace, with its Hanging Gardens, at Nineveh, to the south west of Khorsabad. The outer wall of the Sargon's fortress covered an area of three square kilometres and had seven fortified gates. In times of siege, it became an armed encampment. The palace sat astride the outer wall. It had an area of 9 hectares. All the buildings had thick mud brick walls without windows but with doors opening onto internal courts of various sizes. The largest were the Grand Entrance Court and the State Court. The Throne Room was built into the wall between the State Court and a smaller domestic court used by women and children. Smaller courts near the Grand Entrance Court were associated with the service wing and with a group of Temples and a seven-tiered ziggurat. It seems likely that the large ceremonial courts were bare but that the smaller residential courts had shade plants and pools like Egyptian gardens. A separate enclosure with a temple to the God of Vegetation, Nabu, is also likely to have been vegetated. 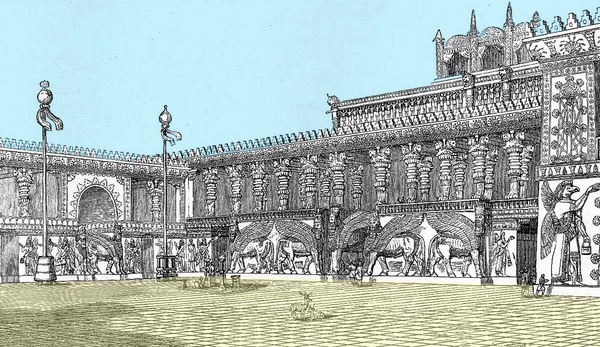