Interestingly, the Tibetan Peace Garden in Geraldine Mary Harmsworth Park is beside the Imperial War Museum. It was completed in 1999, funded by the Tibet Foundation and designed by a sculptor: Hamish Horsley. The garden name is Samten Kyil, Tibetan for “Garden of Contemplation”. The design is loosely based on a Dharma Wheel and has, as a centerpiece, a Kalachakra Mandala carved in black limestone. Outside the Dharma Wheel are four sculptures to represent gateways for the elements of earth, water, air and fire. These are the four main elements in the Pali Buddhist Canon (there is some mention of a fifth element - space - and some mention of a sixth element - consciousness). In Tibetan Buddhism, five natural elements are recognised and symbolised with five colours:  space (blue), water (white), fire (red), air (green), earth (yellow). These colours are also used, in this order, on Tibetan prayer flags. Since neither the colours nor the flags are used in London's 'Peace Memorial' its character is more like that of a European War Memorial than a Tibetan commemoration of the Buddha's compassion and peacefulness. The use of prayer flags can be seen in the World Peace Garden at Samye Ling in Scotland. See also: note on Buddhist garden design. 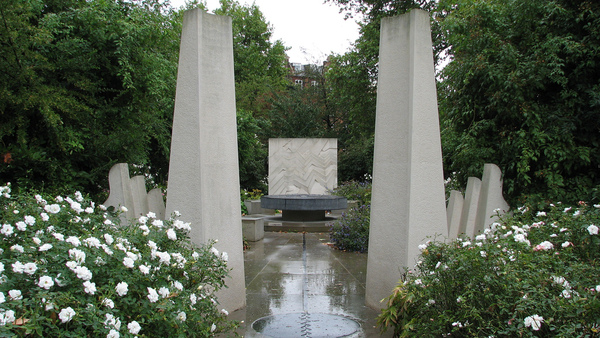