Though it is a secular school, the garden of the Druk White Lotus School in Ladakh is being developed under the influence of Buddhist garden design ideas. See:

The influence of Buddhism on garden design

Buddhism is the world religion with the strongest connection to gardens. It  originated in the foothills of the Himalayas (c600 BC): see entries on Kapilavastu and Lumbini. It is therefore understandable that mountains came to be associated with gods. Deities have a place in Buddhism but there is no creator god. Mount Sumeru (Mount Meru in Hinduism, sometimes identified with Mount Kailash) was believed to be at the centre of the world. Buddha spoke to his followers in the Deer Park of Isipatana (Sarnath) and groves of trees became an important aspect of Buddhist sacred space.

The Zen garden is the best-known type of Buddhist garden. But the fame of Zen gardens is out of all proportion to their numerical significance. Zen ideas influenced the Japanese from the 12th century onwards, inspired by Chan Buddhism and Chan gardens in China. The term 'Zen garden' was devised in the 1930s and does not have an agreed or satisfactory definition. Zen ideas are often associated with what Wikipedia calls 'The Japanese rock garden (æž¯å±±æ°´ karesansui) or "dry landscape" garden, often called a zen garden'. A wiser approach would be to associate Zen gardens with Zen design principles. They include the Zen principles of:  Austerity, koko;  Simplicity, kanso;  Naturalness, shizen;  Subtlety, yugen; Imperfection and asymmetry, wabi-sabi; Tranquillity, seijaku.

The Pure Land Sutras, written in India during the 2nd century A.D. say that men can attain rebirth in the Pure Land of the West (or 'Western Paradise') from where they can proceed to nirvana. The Sutras contain a description of a perfect garden - see extracts below. This is a tennet of Amanda Buddhism (also known as Ananda and Amida Buddhism and a predecessor of Zen Buddhism). [Buddhism reached China in the 1st century AD - see note on Chinese Gardens]

The Lotus Sutra was given by the Buddha toward the end of his life. It was recorded as the "SÅ«tra on the White Lotus of the Sublime Dharma." The White Lotus Society has its origins in thirteenth century China. When it was banned, in the period of the Yuan (Mongol) dynasty, it became a secret society.

The Buddhist term vihara (literally 'pleasure garden of a monastic precinct') came to denote the monastic dormitory and hall. A chaitya is any sacred place (tree, spring, lake etc.). A stupa was originally a burial place but many stupas do not contain relics and the term is now used for any Buddhist shrine with a circular mound form. A building containing a stupa is called a 'chaitya hall'. Stupas are frequently placed on hills and the upward journey symbolises the journey to heaven. One of the greatest stupas is at Borobodur (or Barabudur) in Java: 'The stupa is in a long, fertile valley, again on top of a small hill, nestling against a protective backdrop of mountains. The whole field is thus the nave of the chaitya; the hill the stupa's pedestal; and heaven above its arched ceiling. As the mist rises from the foothills of the valley, this enormous monument reveals its volatile silhouhette, light as the rising crest of a wave... Waiting for [the pilgrim] above are the square terraces representing this world, and the circular terraces representing the world of God... Treading the right path to the Mountain of God, he knows that he is heading for the Supreme Truth'. (Nelson I Wu, p 19). Small stupas also use square bases with circular structures above.

Though originally an Indian religion, Buddhism almost disappeared from India after the thirteenth century, except in the Himalayan region. The depredations of Turkic, Afghan and Arab invaders contributed to its demise but in many respects it was also absorbed into Hinduism. Buddhism flourished in China until 1949 and continues to flourish in many south and east Asian countries, including Sri Lanka, Japan, Burma, Cambodia and Thailand.

The Pure Land sect teaches that repeating the Buddha's name, and worshiping him, will make entry to paradise more likely. The making of Buddhist gardens in Japan was inspired by Pure Land Buddhism, imported from China. The Mandala, showing Buddha with a temple and a garden inspired the making of gardens with equivalent symbolism. Mandala is a sanskrit word meaning circle, polygon and community. It is used by Buddhists as a symbol of a person in the world, and the universe, as an aid to meditation. The mandala shows a palace with four gates facing the four corners of the earth. A lotus blossom is at the center. It has four petals and rests on a bed of jewels. The gates are guarded by doorkeepers. See for example Joruriji.

'Zen' is a Japanese version of the Chinese word 'Ch'an', meaning meditation, and describes the Meditation School of Buddhism which reached China, from India, c 520 CE and was then introduced to Japan, from China, in 1191 CE. It was carried by a monk (Esai) who had been sent on a mission to China and returned to found monasteries in Japan (the Renzai sect). Esai also introduced the tea ceremony to Japan, because tea was regarded as an aid to meditation. In the sixteenth century, the tea ceremony led to the development of stroll gardens in Japan. Zen Buddhism was also taught through archery, so that the bowman could hit a target 'without aiming'. Satori ('enlightenment') should come suddenly and spontaneously, without conscious striving. Likewise with happiness: it comes from the pursuit of another goal, not from its own pursuit. Making a fine garden can contribute to enlightenment and contentment. It requires skill, artistic judgement, understanding of nature - and constant practice. Thus gardening can be a religious activity. See for example Ryoanji

Buddhist gardens in the UK

The Land of Bliss, Pure Land or Western Paradise

[Extracts from the LARGER SUKHAVATI-VYUHA, or Sukhavativyuha Sutra or The Sutra on the Buddha of Eternal Life]

15. 'And, O Ananda, the world called Sukhavati belonging to that Bhagavat Amitabha is prosperous, rich, good to live in, fertile, lovely, and filled with many gods and men. Then, O Ananda, in that world there are neither hells, nor the animals nor the realm of departed spirits, nor bodies of fighting spirits, nor untimely births. And there do not appear in this world such gems as are known in the world Sukhavati.

Bhagavat said: 'What do you think, O Ananda, where do these other beings find their place, who in this world dwell above the king of mountains, Sumeru, namely, the Yamadevas, Tushitas, Nirmanaratis, Paranirmitavasavartins, Brahmakayikas, Brahmapurohitas, Mahabrahmans, as far as the Akanishthas?'

Ananda replied: 'O Bhagavat the result of works and the outcome of works are inconceivable.'

Bhagavat said: 'Here, you see, the result of works and the outcome of works are inconceivable. But to the blessed Buddhas the position of Buddhas is not inconceivable, while to thee the holy and miraculous power of virtuous beings, whose stock of merit has become ripened, seems inconceivable.'

Ananda said: 'I had no doubt on this, no difference of opinion, or hesitation; on the contrary, I ask only the Tathagata about this matter in order to destroy the doubts, the differences of opinion, and the hesitations of future beings.'

Bhagavat said: 'All right, Ananda, this is what you ought to do.

#18. ' In that world Sukhavati, O Ananda, there flow different kinds of rivers; there are great rivers there, one yojana in breadth; there are rivers up to twenty, thirty, forty, fifty yojanas in breadth, and up to twelve yojanas in depth. All these rivers are delightful, carrying water of different sweet odor, carrying bunches of flowers adorned with various gems, resounding with sweet voices. And, O Ananda, there proceeds from an instrument which consists of hundred thousand kotis of parts, which embodies heavenly music and is played by clever people, the same delightful sound which proceeds from those great rivers, the sound which is deep, unknown, incomprehensible, clear, pleasant to the ear, touching the heart, beloved, sweet, delightful, never tiring, never disagreeable, pleasant to hear, as if it always said, "Non-eternal, peaceful, unreal." Such a sound comes to be heard by these beings.

'And those great rivers flow along, full of water scented with the best perfumes of the Uragasara sandal-wood, of Tagaras, dark, fragrant sandal-wood trees, Agarus, and heavenly Tamalapattras; covered with flowers of the white waterlilies, and heavenly Utpalas, Padmas, Kumudas, and Pundarikas; full of delightful sounds of peacocks, sparrows, kunalas, cuckoos, sarikas, parrots, ducks, geese, herons, cranes, swans and others; with small islands inhabited by flocks of birds, created by the Tathagata; adorned with fields, full of metals; with fords on which it is easy to drink, free from mud, and covered with gold dust. And when these beings there desire, thinking what kind of wishes should be fulfilled for them, then exactly such wishes are fulfilled for them according to the Dharma.

'And, O Ananda, the sound which rises from that water is delightful, and the whole Buddha country is aroused by it. And if beings, who stand on the borders of the river, wish that the sound should not come within their ear-shot, then it does not come within their ear-shot, even if they are possessed of the heavenly ear. And whatever sound a man wishes to hear, exactly that delightful sound he hears, as for instance, the sound "Buddha, Dharma, Sangha, the perfections, the stages, the powers, perfections, freedom from attachment, consciousness; emptiness, unconditioned, free from desire, not made, not born, without origin, not being, and cessation; peace; great love, great pity, great rejoicing, and great forgiveness; resignation to consequences which have not yet arisen, and attainment of the royal stage.

'And having heard these sounds, everybody feels the highest delight and pleasure accompanied by retirement, passionlessness, quiet, cessation, law, and a stock of merit leading to the perfect knowledge.

'And O Ananda, there is nowhere in that Sukhavati world any sound of sin, obstacle, misfortune, distress, and destruction; there is nowhere any sound of pain, even the sound of perceiving what is neither pain nor pleasure is not there, O Ananda, how much less the sound of pain. For that reason, O Ananda, that world is called Sukhavati, in brief, but not in full. For, O Ananda, the whole kalpa would come to an end, while the different causes of the pleasure of the world Sukhavati are being praised, and even then the end of those causes of happiness could not be reached. 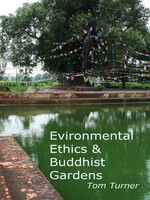 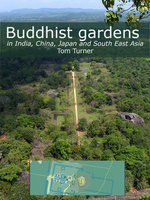 The five sacred colours, in Buddhist symbolism, are blue, white, red, green, and yellow. They can symbolise emotions, parts of the body and the elements: Space, Air, Water, Fire, Earth 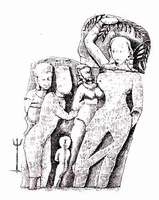 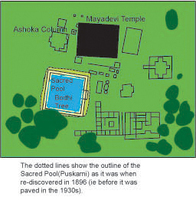 Plan of Gautama Buddha's birthplace at Lumbini, in Nepal

Buddhist mandala set into the paving in Nepal 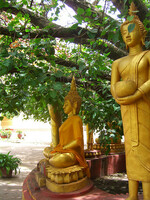 Buddhism is the world faith with the strongest link to gardens. The Buddha was born in a garden, gave his first sermon in a garden, spent the summer monsoons in gardens - and died in a garden. His followers have loved and lived in gardens. (image courtesy imagenious) 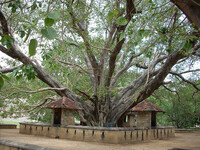