Potsdamer Platz was a famed Berlin cultural centre before the Second World War. It was severely bombed during the war because it was near Hitler's bunker. The area became a no-man's land during the cold war. After the Fall of the Berlin Wall, in 1989, it was re-developed with the aim of recovering its pre-war cultural role. All traces of the hot and cold wars were to be expunged. The Sony Platz section of the Potsdamer Platz re-development was designed as a mixed-use project with space for office, retail, entertainment, residential, and hospitality uses. The central space is a 4,000 square metre tented garden. Its centrepiece is a high-tech steel pool with dancing fountains. This area was designed by the American landscape architect, Peter Walker. Neatly clipped hedges lead the eye to an underground level. Covered walks lead out from the central space, operating like allees in a baroque park. They link to the historic Tiergarten and and to other new spaces in the Potsdammer area. The Sony Centre is at the same time public and private, bounded and unbound, sheltered but not enclosed. A part of the historic Grand Hotel Esplanade has been preserved and it is in its balance between competing objtectives that the centre achieves its greatest success. The hotel fragment speaks of the Berlin which was lost without providing a locus for remembering the agent of its destruction. 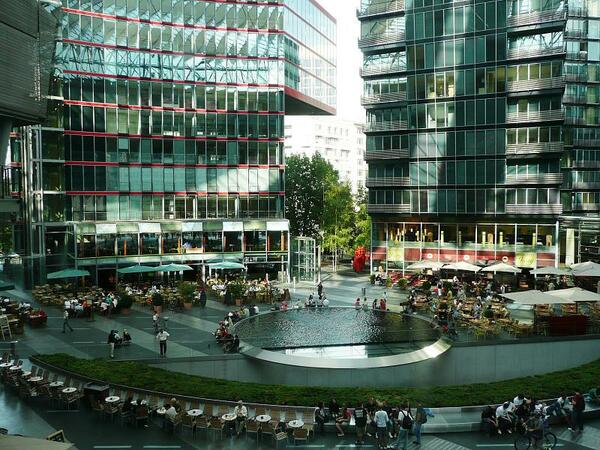 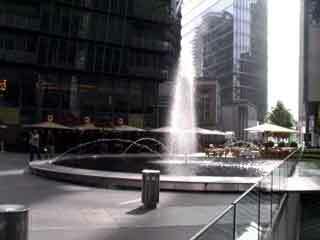 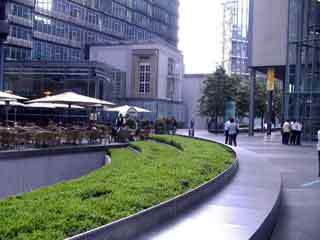