The name Sanssouci, meaning 'without care', tells us something of the man who began this park in 1744. Frederick the Great cared less for pomp and display than many contemporary garden-makers. Like his sister, who made the Ermitage at Bayreuth, and like Lord Burlington, Frederick had a love of Cicero and the landscape of ancient Rome. Yet he spoke French and his taste was French Rococco. Voltaire was a guest at Sans Souci for three years. On a site which had been a vineyard, Frederick was inspired by Virgil's passion for cultivating the vine. This led him to make the most remarkable feature of Sanssouci: the ripple of vine terraces which descends the hill. It supplied the court with fresh grapes and figs. Glazing protected the fruit in cold weather. Frederick did not have a hunting park, thinking the activity cruel and therefore unworthy of an enlightened monarch. His beautiful Chinese Tea Pavilion, of 1754, reflected an 'enlightened' interest in exotic lands. The flight of steps which runs through the vineyard terraces forms a T-junction with what became the main axis of the garden, striking west to the Neues Palais, 2 km from Sanssouci. The palace was completed in 1769 and Frederick scarcely used it. Sans Souci represents an insecure enlightenment: government for the people but not by the people. It contrasts with Schönbrunn, which displays a wavering imperial past. Frederick's reign had begun in the same year as Maria Teresa's. She was Schönbrunn's creator and Frederick's chosen adversary,. Frederick died 1786 in but the park continued to expand and develop for almost two centuries. In the years after 1825, a descendent of Frederick asked Lenné to design a landscape garden, the Charlottenhof, on land adjoining Sanssouci. Gradually, Sanssouci became an example of the nineteenth century Mixed Style. Schinkel, the great Neoclassical architect, designed the Charlottenhof in 1826, the Court Gardener's House in 1829 and the Roman Baths in 1834. He loved to create pictureseque effects by treating architecture and landscape as one. 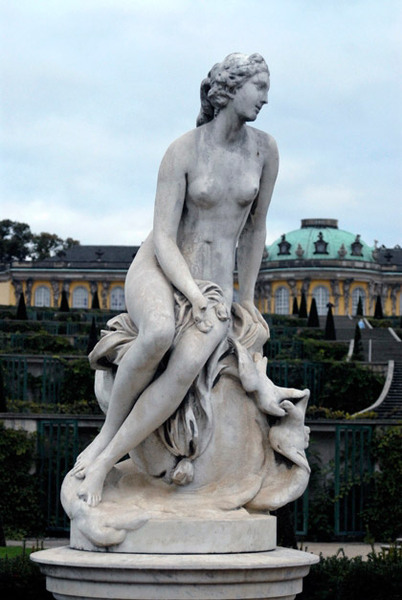 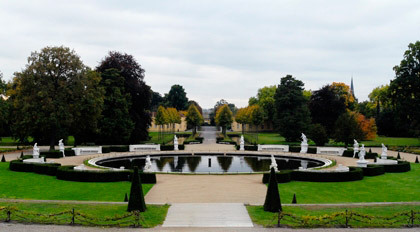 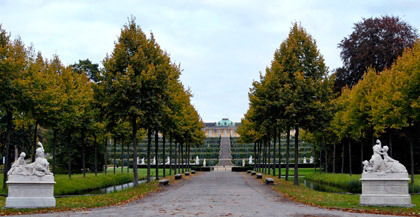 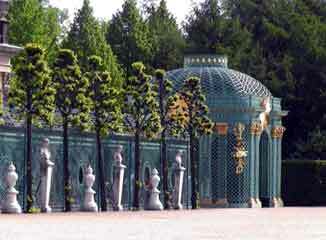 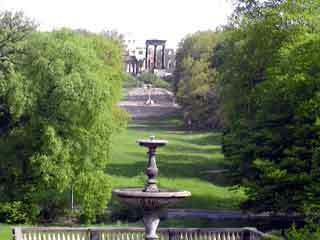