The Folded Landscape (or Folding Landscape) for Laban Center was designed  by landscape architect Stephen Schraemmli from Zurich based firn of Vogt. The building, by the Swiss architects Herzog & de Meuron, is clad in diaphanous, and multi-coloured, polycarbonate sheeting. The entrance front is approached through multifaceted composition of geometrical grass mounds. Reflections of the mounds in the mirror glazing propagate the design idea. The angled grass mounds are re-inforced with geotextile and the arrises are formed with timber. The timber is being damaged by grass cutting machinery and will have to be replaced in due course. The grass 'pyramids were made with Lindum Grassfelt, a living grass grown on a biodegradable felt base. It was nailed to the wooden batons.

The design philosophy is Postmodern and post-structuralist. Inspired by Gilles Deleuze, Vogt Landscape Architects give the following account of the project "The dancing school known as the Laban is located in Deptford, an industrial district to the southwest of London. The design of the garden reflects the interior of the building, which is characterised by ramps. Unlike the neutral and homogeneous spatial configurations of classical modernism, a heterogeneous exterior space was created. The way to the main entrance to the west of the site leads in a slightly zigzag course through a hilly landscape to the building. The lively landscape provides a clear contrast to the surrounding flat city landscape. Sloping lawns composed into geometric hills formulate the horizontal and vertical appearance of the landscape design. A continuous space with locally differing qualities was created by bending and folding. As in a natural landscape, chains of hills and dales form extremely dissimilar situations that can be variously used, for example the lawn steps as a performance room in the sense of an amphitheatre. The modelling of the ground also made it possible to dispose of the existing, contaminated soil on the building side of the site at a reasonable cost. The decision to refrain from planting trees was based on ecological considerations: a rare bird, the black redstart, would otherwise have been hunted by birds of prey lurking in the trees." 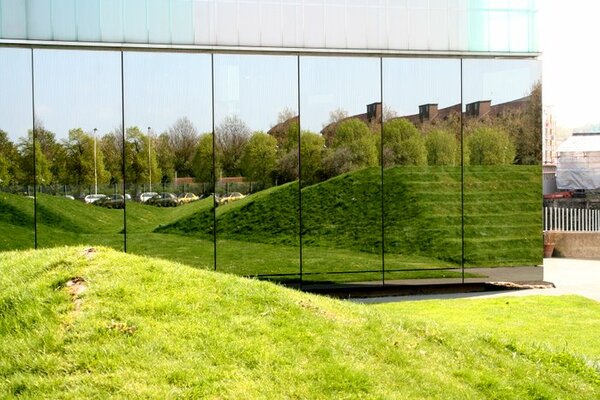