Deepdene House was a 'treasure house' and had perhaps the first Italianate gardens made in nineteenth century England. It was a fabulous and famous place.

Deepdene belonged to one of the richest men in in England. It was designed by Thomas Hope and his architect William Atkinson and is illustrated in a History of Deepdene (1820). The style, influenced by Price and Knight, was seen as Italian, with steps, terraces and conservatories used to blur the distinction between house and garden. J C Loudon, borrowing G L Meason's term, described it as an example of 'Landscape Architecture'.

The Deepdene estate was developed for housing in the he 1920s (by  Maurice Chance) and the house became a hotel. Then a bypass road was driven through the gardens and  the Southern Railway took over Deepdene House during the Second World War. It was finally demolished in 1967. An office block occupies the site and all that remains of Thomas Hope's mansion is the mausoleum - now buried to roof level. It makes one think of Ozymandias, though site is more likely to be re-discovered by moles than wolves:

"I am great OZYMANDIAS," saith the stone,
"The King of Kings; this mighty City shows
"The wonders of my hand." The City's gone,
Nought but the Leg remaining to disclose
The site of this forgotten Babylon.
We wonder, and some Hunter may express
Wonder like ours, when thro' the wilderness
Where London stood, holding the Wolf in chace,
He meets some fragments huge, and stops to guess
What powerful but unrecorded race
Once dwelt in that annihilated place.

Benjamin Disraeli wrote to his wife (in October 1840) that 'we have just returned from the Deepdene... In the midst of the most romantic grounds, and surrounded by the most picturesque park I well remember, Hope (our Hope) has built, or rather is still building the most perfect Italian palace you can conceive - full of balconies, adorned on the outside with busts and crowned with terraced towers, and for all the world, exactly like one of Isreal's etchings - on the front a terraced garden, and within a hall of very large dimensions, with a tesselated pavement of mosaics and which is to hold his choicest marbles'.

The 7th Duke of Newcastle gave the Mausoleum and the surrounding land to the town of Dorking in 1960 to be used as a public open space. In 2003 the idea of excavating and restoring the Mausoleum was proposed. 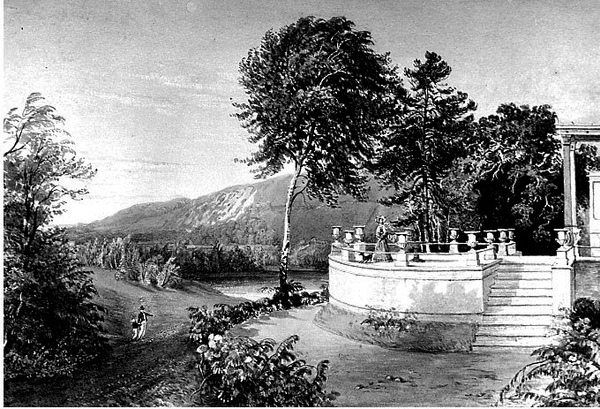