Nishat Bagh is a terraced Mughal garden with lavish fountains. Though less famous than Shalimar Bagh is it just as splendid. Nishat Bagh.garden ascends from the shore of Lake Dal towards the Himalayan peaks which form a backdrop to the garden. It was used as a pleasure garden by the Mughals and became popular with the British in the nineteenth century - and they were probably responsible for converting the planting design to an 'English public park' style with lawns and bedding plants. Susan Jellicoe wrote that 'Although lacking the nobility of Shalamar, it is splendid in a rather showy way and is perhaps the best demonstration of Mughal skill in choosing and exploiting a site' (p 118 'The Mughal garden' in The Islamic Garden Dumbarton Oaks 1976). See chart of Asian garden design styles. The transverse axes are less emphasized than the longitudinal axis but it is a charbagh garden. See note on evolution of the charbagh four square garden 500BC to 1600AD. 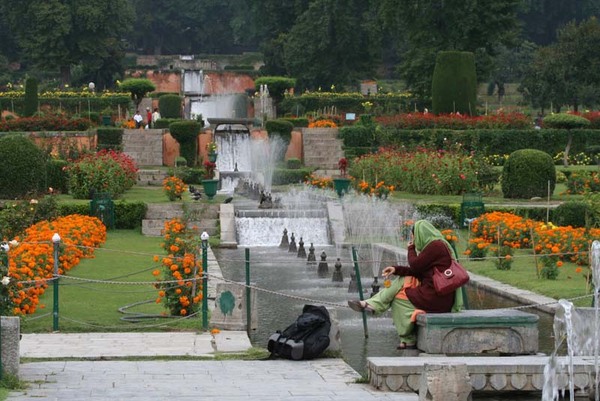