Mughal (or Moghul or Mogul) Gardens

See also: online text of CM Villiers-Stuart Gardens of the great Mughals,  Evolution of the charbagh four square garden 500BC to 1600AD .

‘Mughal’, an equivalent word to ‘Mongol’ and 'Mogul' and is used in India to describe the people who ruled the country from 1526 to 1857. 'Mughal Garden' is used to mean a garden made under the influence of India's Mughal Emperors. Their ancestors, descended from Genghis Khan, had conquered and ruled an enormous geographical area in East, North and West Asia. They absorbed the culture and language of Persian art, architecture and the faith of Islam. Babur, the first Mughal to rule India,  was born in the Fergana Valley (now in Uzbekistan) and had settled in Kabul (Afghanistan). They brought Persian garden culture to India but it changed under the influence of Hindu and Buddhist culture. They were keen gardeners and made several types of garden: Encampment Gardens Palace Gardens Tomb Gardens Mughal Planting Design.

The Mughals were of nomad origin, from Mongolia, but had previously conquered much of Central Asia, adopting, adapting and spreading the arts and cultures of the territories they administered. A high civilisation developed under Mughal rule in North India, including architecture and gardens, drawing upon the range of sources sketched below.

"Mughal Empire"  was also the self-designation of the Timurids in Central Asia and Khorasan. At the time of the empire's greatest territorial extent the Mughals ruled most of the Indian subcontinent, then known as Hindustan, and parts of what is now Afghanistan and Pakistan. By 1700, the empire had reached its zenith with a territory spanning 4 million km² and over 750 million acres.

Some of the influences on Mughal Gardens may derive from the Hindu and Buddhist civilizations of India. Others reached India with the conquerors, who followed earlier Islamic invaders (Arab, Seljuk, Persian, Afgan etc). A Turkic language was spoken in Mongolia and the people were skilled horsemen. Their empire functioned as a bridge between West and East enabling the exchange of ideas and technology between Europe and China. The Mongol conquest of Persia led to their adoption of Persian culture, including its religion, art, architecture, script and language. The gardens of the Islamic world drew upon Persian and Christian sources, which themselves drew from the ancient civilisations of Egypt and Mesopotamia. The situation is further complicated by the fact that hardly anything survives of the old garden culture in this vast region. Though written without the innumerable qualifications proper to the circumstances, what follows is a hypothesis which attempts to set Mughal gardens in a broad West Asian context.

Though little is known about India’s pre-Islamic gardens, a love of flowers and forests runs deep in Hindu literature. Marie-Luise Gothein, in Indische Garten (see eBook) saw Hindu influence as significant but since the 1970s Mughal gardens have been ‘increasingly viewed as a branch of Islamic garden history’ [James L Wescoat ‘Mughal gardens but Mughal gardens: the re-emergence of comparative possibilities and the wavering of practical concern’ p. 126 in Perspectives on Garden Histories (edited Michel Conan) Dumbarton Oaks Research Library and Collection 1999. One reason for the lack of physical evidence of old Indian gardens is that Hindu palaces were built in timber and have disappeared. The Mughals built mainly in stone and left examples of four kinds of enclosed outdoor space:  Encampment Gardens Palace Gardens Tomb Gardens Mughal Planting Design.

India's most famous 'Mughal Garden' was designed by an Englishman half a century after the rule of the Mughal's ended. It became the President's palace garden, Rashtrapati Bhavan. 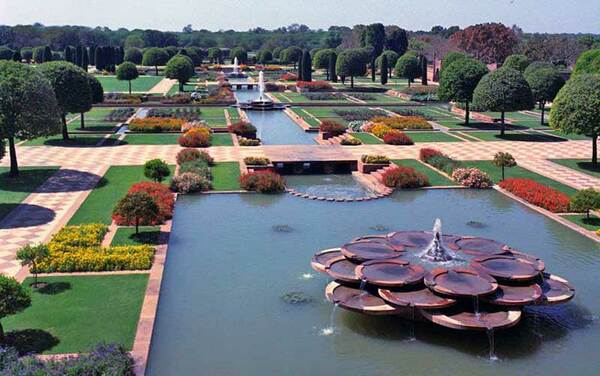 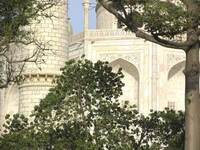 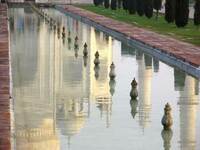 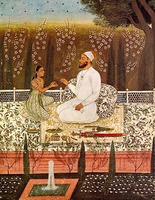