The city was Japan's capital for 1,000 years, known simply as Miyoko ('the capital'). It is near Mount Miei (Hiei-zan) on which there is a famous Buddhist monastry. The the previous capital, 30 miles away, at Nara, the plan was based on the Chinese city of Ch'ang-an: a grid of streets with an imperial enclosure (the Daidairi). Possibly because Kyoto is surrounded by hills, as is evident from the aerial photograph, it did not need the high defensive walls which characterize Chang-an and other traditional Chinese cities.

The Heian Shrine, built in 1894, illustrated the original architecture of the city. It is a model of the Great Hall of State of the Daidairi. The original palace was destroyed by fire though a small section of its garden survives. 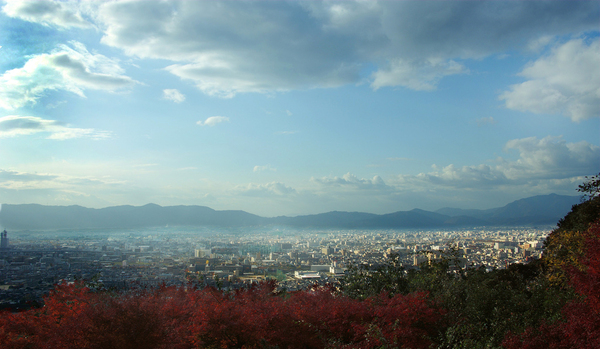