The Bauhaus pioneer Walter Gropius designed this house for his family when he took a job at the Harvard Graduate School of Design. It had a profound impact on American architecture but the garden design is curiously Arts and Crafts in style, indicating that Gropius had no understanding of how Bauhaus principles might affect garden design. 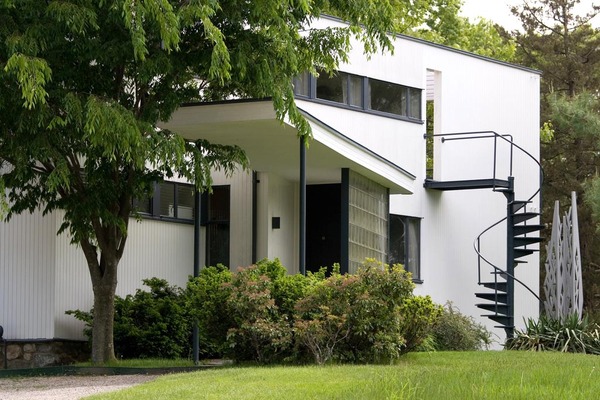 From the National Historic Register status:

The landscape that the Gropiuses planned reiterated the economy, simplicity and careful planning that characterized their approach to the house. The property when they began to plan their residence had an orchard of 90 apple trees on the slope in front of the house site. Early on, they determined to introduce a few trees to the house site for shade and visual definition of the building. According to their daughter, Ati, they went looking for appropriate trees on surrounding land belonging to the Storrows. Before construction began, five trees were transplanted to the site.
The grade at the top of the hill was leveled before construction. The area immediately around the house was fashioned into a flat grassy plinth bordered on the south and west by retaining walls. This area became outdoor living space with areas designated for sitting defined by flagstones set into the grass and other areas given over to grass or plantings. While the retaining walls suggested the stone walls remaining elsewhere on the property that are remnants of its past use as farm land, the new retaining walls were topped with flat flag stones, a solution intended to make mowing easier. South of the screened porch two lally columns supporting a wooden beam were set into the landscape 20' south of the porch to act as a frame for distant views. Outside of the grassy plinth on the private sides of the house are areas that were less actively maintained where brush was kept down and natural features such as boulders were enhanced with plantings. On the south, this outer area was bordered by the remains of a farm stone wall. The Gropiuses, thus, fashioned the landscape into a series of spaces that progressed form the planned landscape immediately around the house to a less cultivated intermediate space further out and finally to the natural and agricultural landscape beyond that was present when they came. Never were planned features intended to create barriers between portions of the landscape. Borders were suggested by various means, but were always permeable, and the gradient between the house, its immediate surroundings and the less worked and natural landscapes beyond was always discernable. The retaining walls do not form a rigid rectangle. A vestige of a retaining wall on the east extends a short distance from the south retaining wall at right angles and terminates in a raised seating bench. The retaining wall along the south side extends beyond this return. Elements such as these were intended to suggest permeable spatial boundaries and informal closure between the house and its surroundings.
Landscape historians now recognize that the landscape reflects modernist spatial philosophy as much as the house does. Walter Gropius had, in fact articulated in writing that spatial philosophy as early as 1933, and his ideas surely guided the layout of the Gropius landscape. The distinction is that Walter and Ise Gropius were amateur gardeners not landscape architects. They came to their treatment of the landscape not through formal training but through the intuitive use of their spatial and aesthetic senses to shape and cultivate the landscape for their own enjoyment. As Ise remembered, "We did the landscaping ourselves over a long period of time."
Plantings were as carefully chosen as any elements of the design for their aesthetic appeal and to enhance built or opportunistic features of the landscape. Daylilies and yucca were planted by the entrance, with the aluminum sculpture by R.E. Filipowski itself looking like a stylized shrub adjacent. Pink roses climbed the trellis, white bittersweet climbed lally columns and Concord grapes climbed the deck elements. A perennial border was planted in the garden bed south of the porch near the informal flag stone terrace outside the living room. Outdoor floodlighting maintained the continuity between the house and the landscape even after dark. The orchard was retained and pruned. The grass in the orchard was allowed to grow tall, except for a 12' wide strip adjacent to the driveway that was kept short.
A significant change to the landscape occurred after the Gropiuses took a trip to Japan in 1957. Thereafter, they replaced the perennial border beyond the porch with a Japanese inspired garden. A gravel bed was put in, azaleas and other plants were placed in an asymmetrical arrangement and a red-leafed Japanese maple tree was planted at the end of the bed.

$10 adults $9 seniors $5 students Free for Historic New England members and Lincoln residents Landscape visitation is free to the public from dawn to dusk year round.