In the 1790s, John Codman carried out extensive improvements to the original Georgian house and surrounding grounds. John Codman wished to create an English landscape park (c 1798). Five generations of the Codman family lived here. The gardens have a hidden Italian garden (c. 1900), perennial beds, and a lily pool and an English cottage garden, (c1930). The Italian garden was designed with the help of Edith Wharton. As in her own garden, she knew what she ought to do but lacked sufficient design talent for the job. 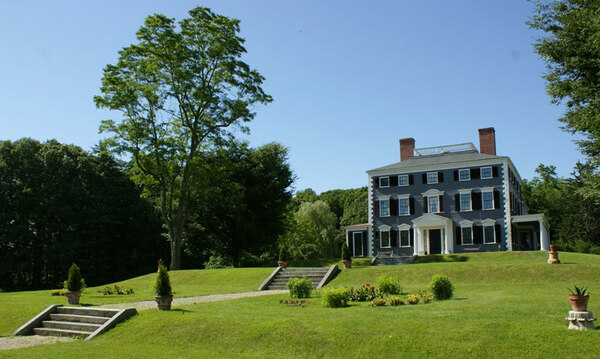 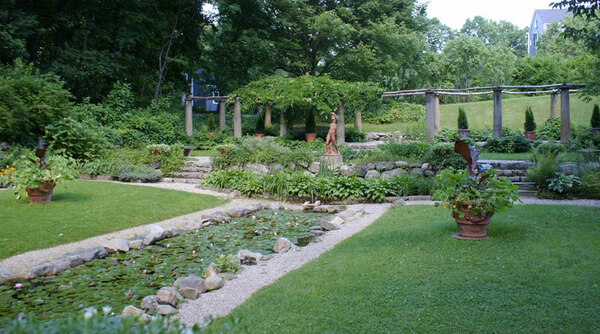 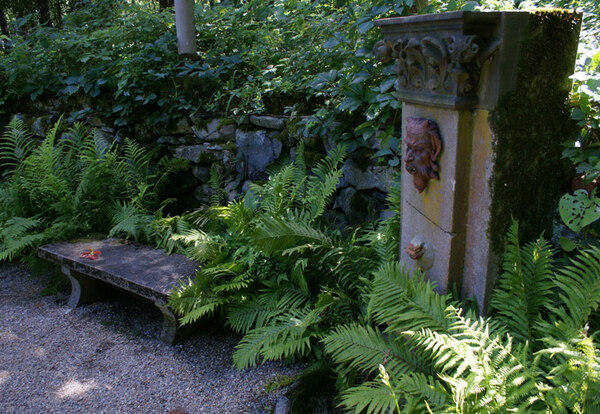 Historic New Englandâ€™s Codman House in Lincoln, Massachusetts, and its grounds are an outstanding example of a country estate laid out in and English manner. The house is prominently sited on a knoll with a commanding view. The splendid park-like setting includes a ha-ha, or sunken fence, specimen trees, and plantings. An Italianate garden, hidden in a dell behind the house, dates from the turn of the century. A rose garden near the Carriage House, redesigned by Dorothy Codman in 1908, once held more than 250 plant species.

The Estate
Chambers Russell built the original structure between 1735 and 1741 as a two-story Georgian manor house with an L-plan. The seven hundred acres estate consisted of a mansion house and working farm with ten or more farm buildings. The landscape during the time between 1735 and 1767 was a peak period of agriculture and animal husbandry.

By 1798, John Codman undertook major improvements to the Codman Estate that doubled the size of the mansion. Executed in the Federal style, the renovations are attributed to Charles Bulfinch. Influenced by the picturesque views, productive farmland, and ornamental gardens that Codman viewed on estates in England, John Codman embarked on a redesign of the grounds. Codman separated the propertyâ€™s ornamental landscape, and installed the (invisible; the retaining wall is visibleâ€¦) retaining wall around the Octagon meadow known as a â€œha-haâ€ wall, or sunken fence. Shaded avenues of elms, picturesque vistas, and winding paths impart a â€œnaturalâ€ style along side of the formal â€œelegantâ€ parterres adjacent to the house. Codman was interested in improvements to the farmâ€™s agricultural productivity; he was a founding member of the Massachusetts Society for the Promotion of Agriculture, established in 1792. Orchards of apple and peach trees, pastures for grazing, vegetable and flower gardens and culinary herbs were all planted. After a visit in 1800, Mrs. Christopher Gore (Elizabeth) remarked that the Codman House â€œwas the handsomest place in America.â€

In 1803, following John Codmanâ€™s death, son Charles Russell Codman, in order to finance his lifestyle of travel and art collecting, sold the Codman Estate in pieces between the years 1815 -1844. The property was out of the Codman family hands for 55 years and went into a period of decline.

Charles Russell Codmanâ€™s son Ogden Codman and wife Sarah Bradlee Codman married 1861. They purchased the estate as their country house 1862, where Codman renamed the estate, â€œThe Grange.â€ Renovating the house with architect, John Hubbard Sturgis, in 1863 on the as a gentlemanâ€™s country seat, farm activities were entirely in the hands of tenants and overseers. Historic photographs depict the Codman family enjoying outdoor activities like lawn tennis, riding, and gardening, as use of the landscape for recreation became popular in the nineteenth century. By 1870, the deteriorated old stable was replaced with a Federal style stable and coach house, which still stands today. Codman kept animals such as hens, pigs, oxen, work horses and pleasure ponies; corn and hay was planted for fodder. All vegetables, small fruit, and berries in addition to fruit trees were raised on the farm for family and tenant employees, a practice that lasted into the nineteen-forties and nineteen-fifties.

In 1866, Codman placed an order for nineteen different deciduous trees, some of the weeping variety, as an idea for making a private arboretum. This pastoral idyll of walks, picnics, croquet, and pony rides was abruptly ended by the Great Boston Fire of 1872 which was disastrous on family finances. In order to re-trench, the Codman family sailed to Dinard France for a ten year period of â€œexileâ€ only returning to Lincoln in 1884 for a financially precarious period of travel between the two continents. In 1897 they settled at the Grange in Lincoln.

Sarah Bradlee Codmanâ€™s diary meticulously kept from her engagement until her death in 1922, provides a vivid depiction of the estate during this interval. Also because of the Codman familyâ€™s meticulous and detailed records, now housed in Historic New England archives, we know with accuracy what kinds of plants were purchased and laid out in the garden beds. In 1892 Sarah Codman records a visit from Edith Whartonâ€™s niece Beatrix Jones Farrand; one can only speculate about the influence on Ogden Codman Jrâ€™s ideas for the landscape plan.

By 1899, son Ogden Codman Jr. advised his mother on the design of a walled Italian garden in the northwest side of the house. This garden reflects Codmanâ€™s sense of classicism and order, with classical proportions, statuary and Florentine terracotta urns. As a â€œgiardino segretoâ€ it sharply contrasts with surrounding picturesque forest and meadows. The left side of the garden was designed to hold shade tolerant plants, like the ferns Sarah Codman collected, as well as foxglove and wild flowers. The sunnier right (North) side was planted with roses, day lilies, phlox, lupine, delphinium, gladiolas and peonies. The west end of the garden, known as the â€œExchange Endâ€ contains a temple-like curved exedra of columns and capitals salvaged from the Codman building on Exchange Street destroyed in 1872â€™s fire. Two fountains were in place by 1903. At the foot of Bacchus, iris bordered by nasturtiums were planted and at Floraâ€™s feet hostas and lilies. The recently restored statue of Flora was installed in 2010; the dolphin and Neptune fountain have been removed and await conservation. Although the gardenâ€™s design has its roots in classical antiquity, the construction and plant materials impart a unique New England flavor. Tom Codman, who had learned to work with concrete made the columns where rough poles were placed to support wisteria, clematis, and honeysuckle vines.

The flower beds installed on the lower terrace were planted out with annual and tender perennials, long after the fashion for â€œbedding outâ€ had passed. The Codman family kept the tradition of these circular interlocking parterre beds which were planted with red geraniums, scarlet salvia, deep red canna, yellow daisies, fragrant purple heliotrope, and white and pink-eyed phlox. Along the steps were Italian pots planted with small trees and yucca. Watercolors by both Sarah Codman and daughter Alice reveal what the black and white photographs of the time cannot: the colors of the annual beds.

In 1903 a site was chosen for the new greenhouse and work was completed by 1904. It was re-furbished in 1913-14 when Dorothy ordered exotic seeds, camellias, gardenias, special citrus and other tender shrubs as well as banana plants, which bore fruit.

Dorothy Codman, like her mother, enjoyed tending her own garden. In the early 1900â€™s, Sarah turned her attention to the new Italianate garden and passed down her old picket fence enclosed French parterre garden to Dorothy, who created a garden which was modest in size, but quite sophisticated in design. Influenced by English garden designer Gertrude Jekyll, Dorothy planted an extensive variety of old and new world flowers and herbs planned for a succession of seasonal bloom. The circular pool, hotbed, table and chairs, and arches were built by her brother Tom. In 1912, over sixty varieties of roses were planted in Dorothyâ€™s garden. Today, climbing roses and clematis cover the fences and arches, while beds hold a mix of hardy perennials, tender annuals, and exotic tropicals. Concord grape and flowering vines cover the two arbors, and white purple and pink lilacs and flower beds frame the garden perimeter.

The hurricane of 1938 destroyed the Italian garden and downed 96 trees, some of which had been there since before the Revolution. In subsequent decades, the remaining family members, Tom and Dorothy, struggled to maintain the property. Brother Hugh died in 1946, Tom spent his last years abroad, leaving Dorothy alone. In 1956 she received news from the town that two Codman trees were afflicted with Dutch Elm disease and would be removed.

June to mid October. Open second and fourth Saturday of the month. Landscape open from dawn to dusk year round.