Before 2009 Exhibition Road was a busy traffic artery running between some of London's major museums. It was then pedestrianised and and made into a public open space, in 2011. Dixon Jones, the designers, provided 'a bold crisscross pattern that extends for the full length and width of the street' with '22,000 square metres of striking Natural Stone granite setts, banded in black and pink' and with 'Marshalls bespoke corduroy paving for demarcation of pedestrian areas for the visually impaired'.
Design comment: As a public space Exhibition Road benefits from high visitor numbers (estimated at 20m/year in 2010) and the high number of students from Imperial College. The design may be thought not enough of a garden for what was once part of the great Brompton Nursery and the Royal Horticultural Society's Garden. The paving pattern is bold in scale and in its use of a diagonal pattern. But the pattern is over-used and overly-directional, giving it more resemblence to a supermarket car park than befits such a distinguished site: it has not yet made up its mind whether it wants to be a 'road', a 'square' or a 'museum garden'. It is much less satisfactory than the Italian piazzas (paved in black and white marble) from which it derives. Marshalls, which supplied the paving stone, has no doubts about the design's success (see video, below). 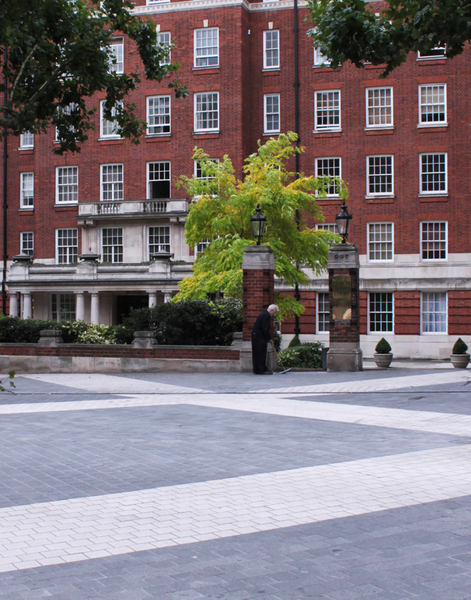 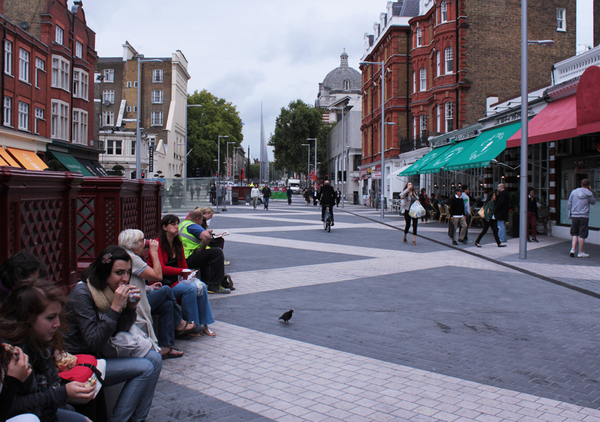