An arboretum planted around a hotel, with lawns and a lake. The arboretum has over 800 species of trees and shrubs. The arboretum includes national collections of hornbeam and elaeagnus and a Wollemi Pine.

Garden Notes – Summer 2009
Perhaps this summer will see a much needed return to the sunny and drier climate that we last enjoyed in 2006. With this hope we have chosen to start the season with a
new collection of Magnolias. These may be seen from the lower ride nearly facing the ash group of trees (of which our Manna Ash, Fraxinus
ornus, is sure to provide a good floral display). The newly planted magnolias should produce a wide variety and succession in the future but we already have established favourites in M.grandiflora Exmouth, M.Soulangeana and M. stellata to give a
transition from spring to summer. Towards the upper end of the ride two flamboyant trees are the Indian Bean Tree, Catalpa bignonoides,
and Foxglove Tree, Paulownia tomentosa. The latter has blue flowers and despite its age is bearing encouraging clusters of buds. We
have taken the precaution of planting a successor nearby! Within the adjacent pleached hornbeam hedge we have trimmed up
and augmented our collection of Buddleias. Apart from the more familiar blue forms we have white, red and purple cultivars, plus B.
globosa with globular orange flowers.
Whilst we have lamented the recent sunless years, it has to be admitted that our lawns and new plantings have
benefited. The putting green, being on thin soil, is now able to face a season of use and makes a good setting for the small lake. In this locality is a particularly good
example of columnar Oak, Quercus robur fastigiata, and a similarly shaped Dawyck Beech. Here too are four Tulip Trees, Liriodendron tulipifera, with their distinctive leaf and, on the other side of the drive, several Lime trees including the lesser known Tilia mongolica, T. tuan and the silvery leafed T. tormentosa, which were planted by past Lord Mayors of London.
Another Lord Mayor’s planting is an unusual species, Quercus petraea purpurea, a purple-leafed form of the Sessile Oak. Two other
contrasting trees here are an American Pin Oak with narrow leaves and an upright habit, and Tilia pallida wratislaviensis which is the
nearest there is to a yellow-leafed Lime. This area promises to be a striking element of the arboretum in future years.
Towards the end of summer our small collection of Whitebeam and Mountain Ashes comes in with early hints of autumn colour. We are particularly pleased with Sorbus scopularia with bright red berries, S. hupehensis which has pink fruit and the native S. Torminalis,
a species not unlike thorn in leaf that is making a welcome
comeback. 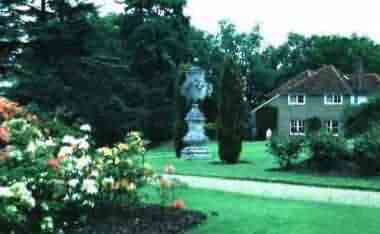 The Beale Arboretum consists of a large and interesting collection of trees. There are some 800 different varieties, many are established, but a large number have been planted in the last 40 years. A number of our trees are now recorded in the Tree Register of the British Isles (Beale Arboretum, Registered Collection no.335). The Arboretum has received wide publicity for its beauty and interest, having been featured in The Times, The Sunday Express, Country Life, Gardener's World, The New York Times, The Radio Times and The Royal Horticultural Society Journal.