William the Conqueror built a castle in Windsor and made the adjoining forest a hunting park. Though its extend is less, the park is still enormous. The Long Walk in Windsor Great Park was designed in the reign of Charles II, as a double row of elms. It is a great Baroque avenue running from Windsor Castle to the Copper Horse (approx 3 miles). A programme of replacing the elms with with oak began in 1859 and, where they did not flourish, this was extended to include Horse Chestnuts and London Plans. Many of the present trees in the Long Walk were planted in the 1920s. The imparked area wavers between ancient woodland and Baroque royal parkland. The adjective 'Great' means 'large' but, in the case of Windsor Great Park can also be read as 'very splendid'. The Park is always open. Windsor Castle is open every day during visiting hours. The Queen's garden is open only when the royal family is not in residence (usually in August. 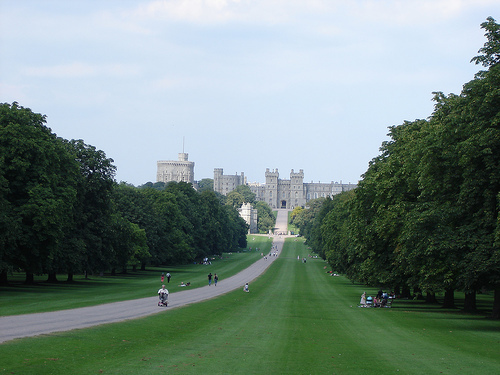