The Vatican has a central place in the history of garden design. As Macaulay pointed out, the papacy was the only institution to live from ancient times to modern times. St Peter's Basilica was built in the 4th century. When re-built in the 16th century the Vatican City became, in essence, a renaissance castle garden. Visitors should note the fortified garden, the Belvedere Court (1505) , the Villa Pia (1560) , the Piazza of St Peter (1656) and the nineteenth century English garden. [The Piazza can be seen at any time. The remains of the Belvedere Court can be seen when visiting the Vatican Museum. The Villa Pia and the English Garden can be seen only by arrangement or during a booked tour.] Bramante's 1505 design for the Belvedere Court 'dictated the basis of European garden design for more than two centuries to come' . From it, designers learned to use a central axis, flights of steps, garden theatres and statuary to establish a geometrical relationship between architecture and landscape. Yet the design was short lived. Sixtus V built a library which divided the great space into the three coutryards, as shown on the plan. The world-famous sculpture collection is no longer here but one can see the antique bronze Pine cone and the peacocks from Hadrian's Villa. Garden historians sigh at the thought of the splendour that has gone: the lower court is now a car park for exercise-averse prelates. The Villa Pia, designed by Pirro Ligorio, is of great interest as one of the earliest and most perfect examples of a garden pavilion. Its indoor and outdoor spaces are beautifully integrated. The third Vatican project, not a garden but of huge interest to designers of outdoor space, is the Piazza of St Peter, also known as the Oval Piazza. Gian Lorenzo Bernini received the commission in 1655. He was a great sculptor, an architect and a painter - who wished to combine these arts. An Egyptian obilisk, sited by Sixtus V in 1586, was used as the centrepoint for a vast oval piazza which might have been inspired by the space in front of the Villa Pia. The encircling colonade was likened by Bernini to the all-embracing arms of the Church. The oval lies at right angles to the direction of approach and is dished so that one can see the whole crowd and the Pope, when he addresses the assembled crowd. 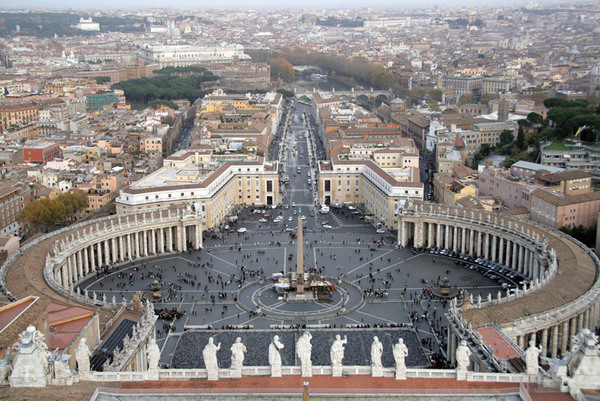 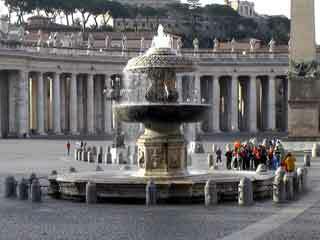 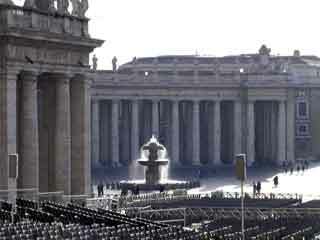