Also known as the 'Garden of the Unsuccessful Politician' and listed by UNESCO. The administrator became humble after being accused of corruption. This is the largest classical garden in Suzhou and one of the most famous gardens in China. It was a scholar garden during the T'ang dynasty and a monastery garden during the Yuan dynasty. It then changed hands many times. The structures are grouped round a labyrinthine lake, rather like a Chinese water village. The Hall of Distant Fragrance is on the south shore of the lake and looks to an island with the Pavilion of Fragrant Snow. 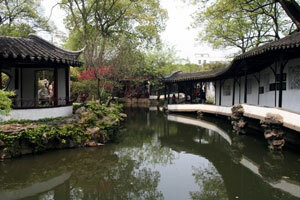