This one of the 4 Suzhou gardens listed by UNESCO. It was founded by a Buddhist monk (Tien Ru) during the Yuan (Mongol) Dynasty and is famous for the rock work around the lake. Some of the rocks resemble lions and thus gave the garden its name. The lake also has a roofed (lang) walkway.

Lion Grove Garden was first built in the Zhi Zheng period of the Yuan Dynasty. It was originally part of the Puti Zhengzong Temple. Inside the garden there are many rockeries in the shape of a lion (shizi), hence the name Lion Grove, or Shizi Lin in Chinese. The celebrated painter, Ni Zan, one of the four masters of the Yuan, captured the beauty of the garden in his famous Scroll of Lion Grove Garden, making the garden more renowned than ever. The Qing emperors Kang Xi and Qian Long visited the garden several times and they had a garden built modelled after it in the Imperial Summer Resort in Rehe (Jehol).
Carefully designed, the east part of the garden is decorated with many rockeries while the west part is covered by a vast body of water. The main structures are to the north, with the pavilions and halls all connected to one another by long galleries. Up and down, turning and twisting, these galleries are well-known for their unique format.
After entering by the gate in the southeast corner of the garden complex, one passes the Yan Yu Hall and Xiao Fang Hall (Small Square Hall). In the backyard of Xiao Fang Hall is a plum-blossom-shaped gate, and in the front of the gate are bamboo trees and rockeries, evoking a perfectly framed Chinese painting. To the north of the plum blossom gate is the Pavilion for Pointing to the Cypress which is the main structure of the whole garden. Looking south from the pavilion, one can see an expanse of rockeries with a forest of cypress trees standing high in their midst. To the southwest of the pavilion is Mountain View Mansion and Lotus Hall which, facing the lake, comprise a vantage point where one can admire the lotuses unobstructed. Further west is the Genuine Amusement Pavilion, Stone Boat and Faint Fragrance Dim Shadow Mansion (Anxiang Shuying Lou), all of which line the shore of the nearby lake. Turning south along the porch on the west, one comes to the Flying Waterfall Pavilion which is the highest spot in the garden. Under the pavilion is a hushi limestone rockery of three layers which drops steeply to join a brook at its foot. Further south are the Pavilion for Greeting the Plum Blossoms (Wen Mei Ting) and Double Fragrance Hall of the Immortals which is at the southwest corner of the garden. To its east, the Fan-Shaped Pavilion and the Pavilion of the Memorial Tablet of Wen Tianxiang (a loyal Song official) mark the southern border of the garden.
The specialities of Lion Grove Garden are its miniature mountains and peaks. The miniature mountain in front of Pointing to Cypress Pavilion has the most peculiar formation. Among its peaks, the Sunshine, Moon Rising, Black Jade and Sky Touching all have their own characteristics, with Lion Peak being the highest. Stone paths connecting the grottos and caves, which are located high and low over the mountain, form a labyrinth. The design of each cave and grotto is different and taken together they make up the famous Eighteen Scenes, with the Hall Sleeping on Clouds (Woyun Shi) situated in the middle. Constructed entirely with hushi eroded limestone, this miniature mountain looks grotesque and towering. 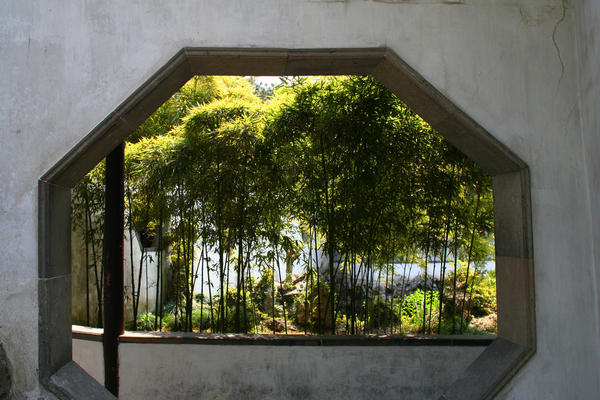 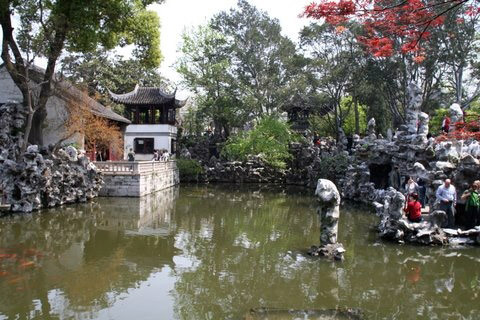 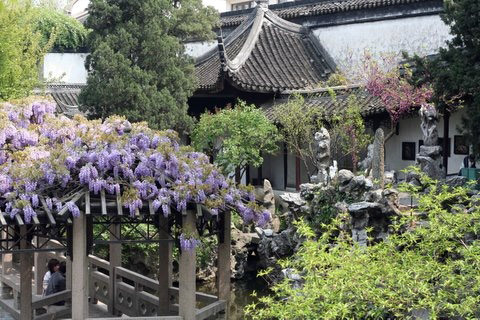