In 2008 Gustafson Porter won the competition to design these two linked squares in central Woolwich which were completed in 2011. General Gordon Square is a green garden square while Beresford Square is the market square for Woolwich. Woolwich Arsenal main line and Docklands Light railway station is on General Gordon Square and the project is a remodelling of an existing green open space. On the north side of Gordon Square is Equitable House, the old Woolwich Building Society Headquarters. The remodelled squares are part of the renewal of Woolwich following the closing of the Royal Arsenal in 1994 and also following the riots and destruction in Woolwich, part of the London-wide riots in summer 2010. General Gordon Square has paths of 95mm thick Chinese granite laid on rigid construction and they to appear to drain to the grass areas. In the south east is a water cascade. Around the edge are larger plane trees and within the park are smaller flowering cherries. Shrub planting consists of monospecific blocks of lavender, Sarcococca, Hydrangea, and dogwood. In 2012 the BBC erected a big screen in the corner near the railway station for the Diamond Jubilee and the Olympics and this has been taken over by Greenwich Council and is now permanent. In the summer of 2012 this did attract crowds for screenings, which in addition to the Olympics included screenings of opera and Wimbledon. Beresford Square is the site of Woolwich open air market, which operates six days per week and also led to the main gate of the old Royal Arsenal. It is entirely paved in granite and above are a web of catenary lighting cables recalling the wires of the old trams. The last London Transport tram ran to Woolwich until 1952. However, the square is also dominated by the traffic noise of the A206 which has been widened since the closure of the Arsenal. These are peculiar places. General Gordon Square was designed to be an urban garden, but the screen has changed it, and it is not a garden. The planting is limited, it is lacks delight and invention. Given it is monospecific block planting it lacks the artistry of Allain Provosts single species blocks in the Thames Barrier Park. Beresford Square lacks the demotic delight of the old market squares when it was tram lines and setts back in the 1970s. And why place granite on a concrete base, the response of the job landscape architect was because the council highway engineers wanted it so. Well previously the paving was flexible, it was laid on sand and rigid paving is high in embodied carbon, high in embodied energy and ultimately cracks. And why not tackle the noise on the A206? 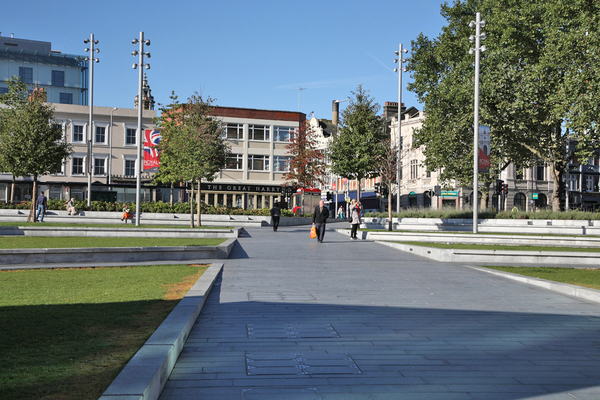 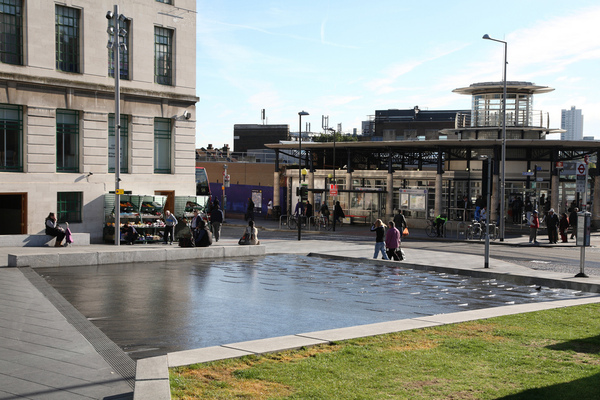