Bundi was the capital city of a princely state during the Rajput era. It has a large fort overlooking a narrow valley and an old town. Bundi Palace, towering above the bazaar, is famous for its murals. The Chitra Shala, named after its paintings (chitra) of processions and mythological subjects opens onto a garden with a central pool, charbagh and seating on four sides. The garden shown in the paintings now belongs to the government and is maintained in a municipal style. The palace remains in private ownership and has several large courts. Once thronged with life, they are now vacant and a little sad. Rudyard Kipling wrote that 'To give on paper any adequate idea of the Boondi-ki-Mahal is impossible. Jeypore Palace may be called the Versailles of India; Udaipur's House of State is dwarfed by the hills round it and the spread of the Pichola lake; Jodhpur's House of Strife, grey towers on red rode, is the work of genius; but the Palace of Boondi, even in broad daylight, is such a Palace as men build for themselves in uneasy dreams the work of goblins more than the work of men. It is built into and out of the hill side, in gigantic terraces, and domi- nates the whole of the city. But a detailed description of it were useless. Owing to the dip of the valley in which the city stands, it can only be well seen from one place, the main road of the city ; and from that point seems like an avalanche of masonry ready to rush down and whelm the gorge. Like all the other Palaces of Rajputana, it is the work of many hands, and the present Raja has thrown out a bastion of no small size on one of the lower levels, which has been four or five years in the building.' Consistent with what is known of Hindu gardens the open spaces in palaces were courtyards and step wells. 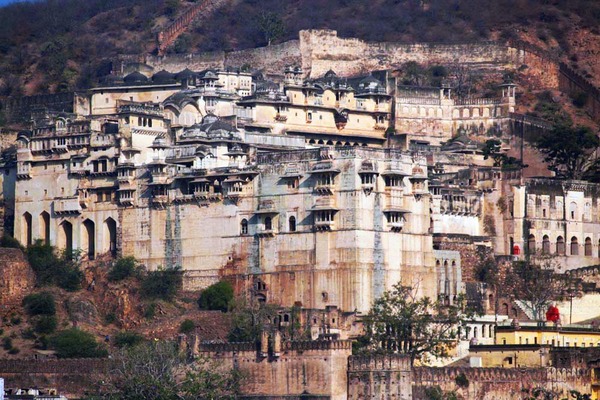 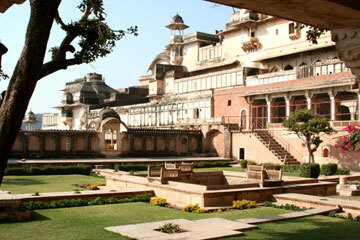