Vienna's Belvedere Palace has a fine prospect of the old city from a beautiful garden. Belvedere means 'a place from which to see beauty'. Though his parents were born in Italy, Prince Eugene was a Frenchman and well-aquainted with Versailles. Spurned by Louis XIV, he became military commander of the Holy Roman Empire, and then 'the most grandiose and influential private patron in Europe'. Eugene was austere and taciturn, but a close friend and comrade of the Duke of Marlborough. They defeated Louis XIV's armies and were rewarded with palaces - one can compare the Belvedere with the original layout of Blenheim. The two generals were known as 'one soul with two bodies' - but they also had two gardens. Eugene had bought land outside the medieval town after driving back the Turks' last assault on Vienna. All Europe rejoiced in its safety from 'the infidels'. Vienna developed a gay cosmopolitan society. The Belvedere has a grand Upper Palace (built 1720-22) and a more comfortable Lower Palace (built 1714-16), where Prince Eugene lived. Gardens link the palaces, with elegant pools, fountains, sculpture, steps and cascades. Immaculate clipped maple hedges bring the sky itself into the design. The theme is man's journey from darkness to the divine light. After Prince Eugene's death, in 1736, his estate passed to the Hapsburgs and continued to be used for social gatherings of pomp and circumstance. A 1731 set of envravings illustrated 'The Wonderful Home of the Incomperable Hero of our Time in Wars and Victories' much as they are today. Gothein II 164. 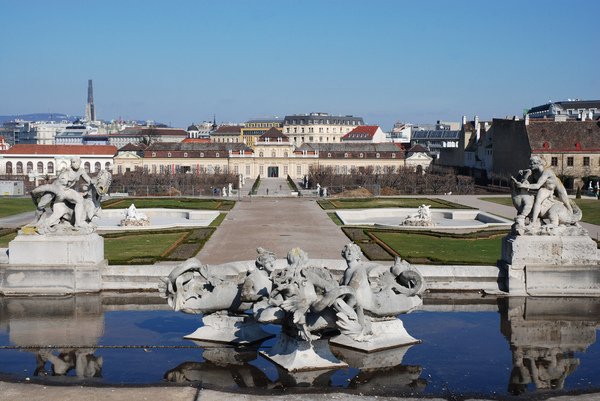 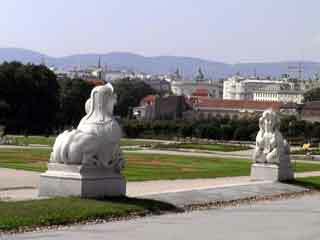