Prestonfield is a 17th century mansion, purchased and restored by acclaimed Edinburgh restaurateur James Thomson. The hotel was named as AA 2005 Hotel of the Year for Scotland and Northern Ireland. The current garden & grounds run to 20 acres. Though originally they would have been far larger they still seem to be huge as they link seamlessly with the golf course and the Royal Holyrood Park which are at the other side of the remains of the original ha-ha. This parkland setting gives the impression of being surrounded by open countryside though in fact the hotel is just moments from the Royal Mile. The dramatic backdrop of the volcanic Arthur's Seat and the adjacent nature reserve of Duddingston loch certainly add to this feeling.

In the 17th & 18th century Prestonfield was famed for its formal Dutch gardens, alleys, bowling greens and statuary. The planting must have been quite exotic too as Dr Johnson's biographer Boswell reported picking apricots here on one of his visits! Sir Alexander Dick a former owner of Prestonfield received a medal from the Royal society for his introduction of Rhubarb to Scotland from China - reflected today in the name of Prestonfield's restaurant, Rhubarb. Some statuary from this date remains including a stone Bacchus fountain and other stonework. A number of trees - notably ancient sycamores & yews also remain - some even likely to be planted at the time of the building of the house in the 1680s. Though clearly shown on maps of the time, the old formality was landscaped away when the grounds were set to the fashion of an Arcadian landscape. With an adjacent loch & the mountainous background of Arthur's seat already in place just a few hundred yards away this was probably just too tempting a fashion to ignore and the results were spectacular - possibly all the more so being so close to the centre of Edinburgh. With a stone-built circular ha ha to keep the grazing stock at a suitably picturesque distance from the house, the parkland landscape was completed with the building of a monumental circular stone stable block in 1816, the addition of fine regency reception rooms to the house and a grand classical porte cochere. Recent work has seen the planting of huge numbers of native trees into the thinning circular shelter belt that surrounds Prestonfield. These are growing well and adding substantially to both the native wildlife and the feeling of rural isolation. Gradually the 1960s plantings of island beds in the immediate proximity to the house are being replaced with more formal beds that hint at the formality that would have been at Prestonfield in its baroque period. Owner James Thomson created a long rose border in 2006 to mark a visit to Prestonfield by HM the Queen. Over 90 feet long and set against the formality of a 10' high yew hedge it is filed with a collection of Old and old-fashioned roses in shades of red from David Austen interplanted with some culinary elements such as purple sage and bronze fennel. Scotch thistles lighten the scheme & hint at the union of the crowns - with thistle & rose in 1707 whilst formality remains with box edging and a series of tall box cones.. At the centre of the rose border is a gothic tea house in darkest aubergine with a lead roof Elsewhere a small formal box garden - very much in the spirit of the old Dutch garden flanks an entrance door. Edged in box with Yew pyramids and box balls this small but exuberant garden will be filled with parrot tulips in spring. Elsewhere topiary on a grand scale has been introduced around the garden - a quartet of standard olive trees in huge stone pots furnish a terrace outside of the hotel's Garden Room whilst a series of 6 3' box balls in lead tanks delineates the main entrance and even a side door has 10' high Italian privet spirals in over scaled Versailles tubs as a welcome. Plans are underway to thin out the shelter belt to create a mile long circular woodland walk for guests, whilst a hedge of 300 yews has recently been planted to screen the inevitable car park. A small productive herb garden is already in use and plans for further planting are likely to grow with the sowing of a wildflower meadow in 2007 and plans to replant the original entrance avenue with double avenues of trees. 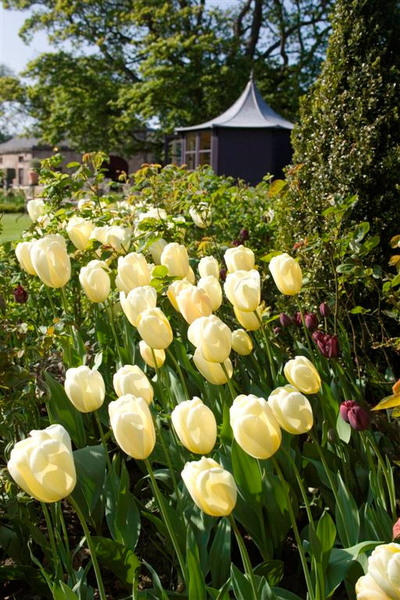 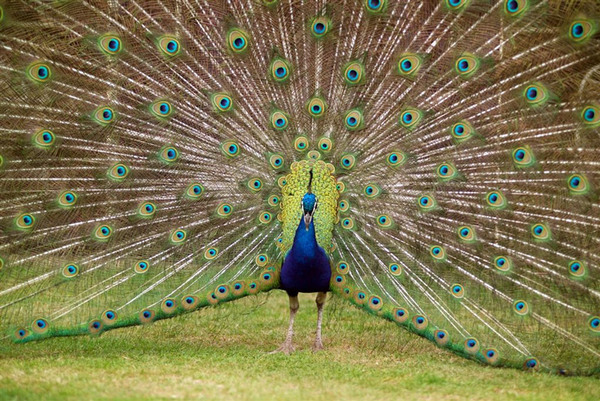 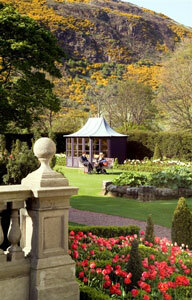 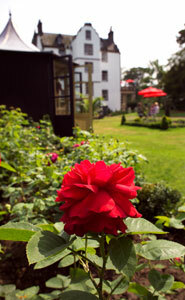 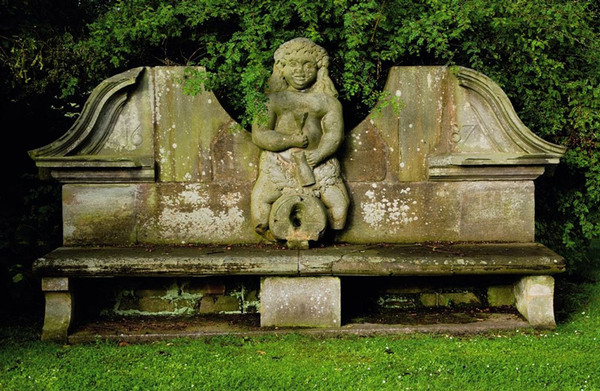 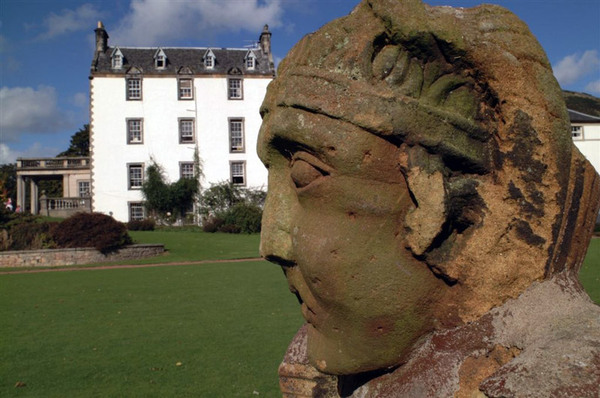 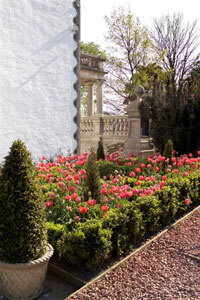