The UEDA landform was designed on the front lawn of the Scottish National Gallery of Modern Art. The design was inspired by patterns of nature, from meteorological effects to chaos theory. Jencks stated that 'I am trying to create a new language of landscape. If you look at the way nature organises itself, it has inherent principles of movement .. I wanted to design something which reflected these natural forces but heightened them.' [National Galleries of Scotland Bulletin, July and August 2002, p14).

Jencks' website states that "Landform Ueda, Gallery of Modern Art, Edinburgh, 1999-2002 (with Farrell and White). A landform based on a strange attractor and the flow of earth and traffic.". The Gallery website states that "The lawn at the front of the building was landscaped to a design by Charles Jencks to create Landform Ueda, which comprises a stepped, serpentine-shaped mound complemented by crescent-shaped pools of water. A combination of artwork, garden and social space, the landform was inspired by chaos theory and shapes found in nature. It won the Gulbenkian Prize for Museum of the Year in 2004."

In The garden of cosmic speculation (p69,  2003) Jencks wrote that 'Since constructed mounds are shaped by machines they naturally form linear, viscous shapes which resemble what are known as "strange attractors" or "chaotic attractors". Two of the most interesting are the Lorenz Attractor, "The Butterfly Effect", with its fortuitous butterfly-shaped wings, and the Ueda Attractor, both of which have inspired the designs'. 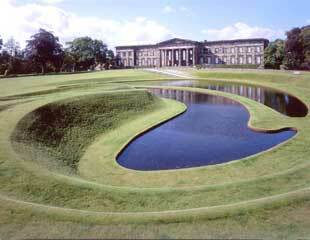 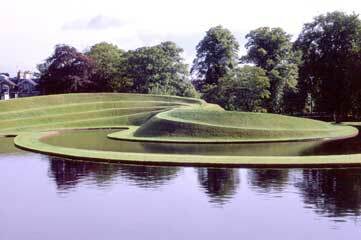 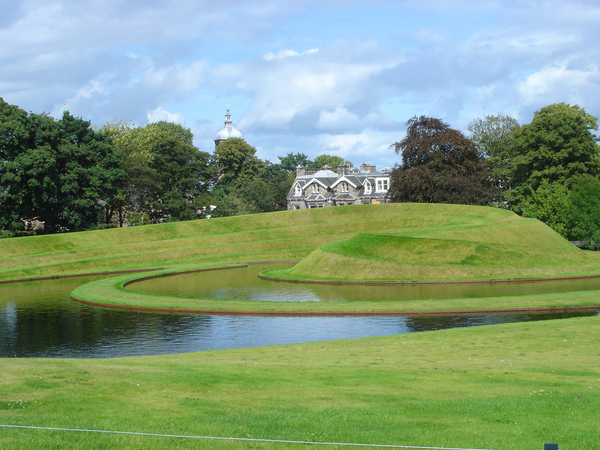