One of Europe's greatest military commanders had a sector of medieval Prague destroyed to make this garden. Count Wallenstein, though born a Protestant in Bohemia, raised and led the armies which gave the Roman Catholic faction most of its successes in the Thirty Years war. He was a cold, egotistical and autocratic man. The garden remains walled off from the town in the medieval manner. But Wallenstein had studied in Padua and its style owes much to the Italian renaissance and early Baroque. A monumental logia reminds one of the Villa Madama. Nearby is a great rock structure with pools and pinacles. The sculpture was designed by by the Dutch artist and designer, Adrian de Vries. Hercules, symbolising power, stands in a large tank of water. Other bronze statues line the formal garden.They are copies of originals which were taken as war booty to Drottningholm by Gustavus Adolphus, demonstrating power. Wallenstein's garden is undomestic, despite its enclosed character. Its use for outdoor concerts is appropriate. Yet one senses the hardness of a man whose life was spent in action and whose life was taken, by Irish mercenaries, at the Emperor's command. There is an abstract modern garden near the Malostranska underground station at the east end of the palace compound. It sits happily in a baroque setting. 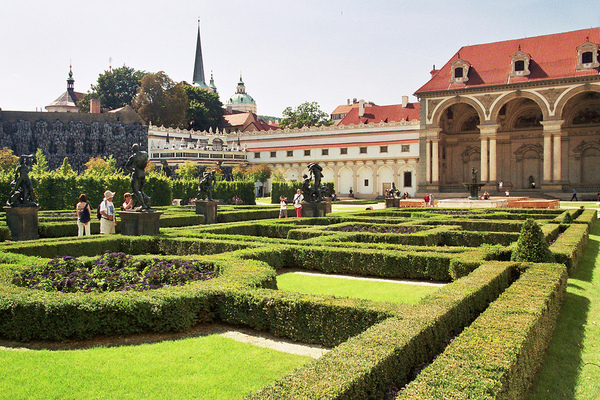 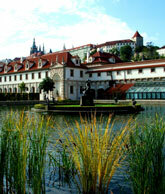 May to September, Daily, 9am to 7pm