Ferdinand I made a renaissance garden in 1534, for his wife. She had 15 children and did not live to see its completion. Ferdinand, the first Habsburg to rule the Czech lands, was an Austrian Catholic in a fiercely anti-Catholic country. The Royal Garden has a singing fountain and a Summer Palace built 1538-64 (also known as the Belvedere Palace because of its good view). The Belvedere was designed by the Italian Paola della Stella and is often described as the most beautiful renaissance structure north of the Alps. The Ball Game Court on the edge of the valley is an elegant building with an allegorical frieze. The garden and its buildings were the first extension of the palace complex outside the fortress walls. Bruce Chatwin (in Utz) wrote, harshly, of 'the gloomy palace-fortress, the Hradschin' where the Emperor Rudolf II 'spoke Italian to his mistresses, Spanish to his God, German to his courtiers and Czech, seldom, to his rebellious peasants'. Rudolph (1576-1611) was the king who moved the court from Vienna, making Prague the centre of a great European empire and initiating the dazzling period which made it such a beautiful city. 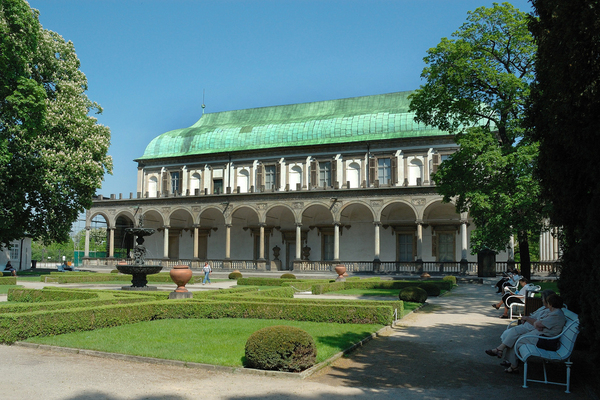