The villa survives and the garden is well maintained. Henry James gave an account of his visit in 1873:

"Yesterday to the Villa Albani. Over-formal and (as my companion says) too much like a tea-garden; but with beautiful stairs and splendid geometrical lines of immense box-hedge, intersected with high pedestals supporting little antique busts. The light to-day magnificent; the Alban Hills of an intenser broken purple than I had yet seen them - their white towns blooming upon it like vague projected lights. It was like a piece of very modern painting, and a good example of how Nature has at times a sort of mannerism which ought to make us careful how we condemn out of hand the more refined and affected artists. The collection of marbles in the Casino (Winckelmann's) admirable and to be seen again. The famous Antinous crowned with lotus a strangely beautiful and impressive thing. The "Greek manner", on the showing of something now and again encountered here, moves one to feel that even for purely romantic and imaginative effects it surpasses any since invented. If there be not imagination, even in our comparatively modern sense of the word, in the baleful beauty of that perfect young profile there is none in "Hamlet" or in "Lycidas". There is five hundred times as much as in "The Transfiguration". With this at any rate to point to it's not for sculpture not professedly to produce any emotion producible by painting. There are numbers of small and delicate fragments of bas-reliefs of exquisite grace, and a huge piece (two combatants - one on horseback, beating down another - murder made eternal and beautiful) attributed to the Parthenon and certainly as grandly impressive as anything in the Elgin marbles. S. W. suggested again the Roman villas as a "subject". Excellent if one could find a feast of facts à la Stendhal. A lot of vague ecstatic descriptions and anecdotes would n't at all pay. There have been too many already. Enough facts are recorded, I suppose; one should discover them and soak in them for a twelvemonth. And yet a Roman villa, in spite of statues, ideas and atmosphere, affects me as of a scanter human and social portée, a shorter, thinner reverberation, than an old English country-house, round which experience seems piled so thick. But this perhaps is either hair-splitting or "racial" prejudice. " 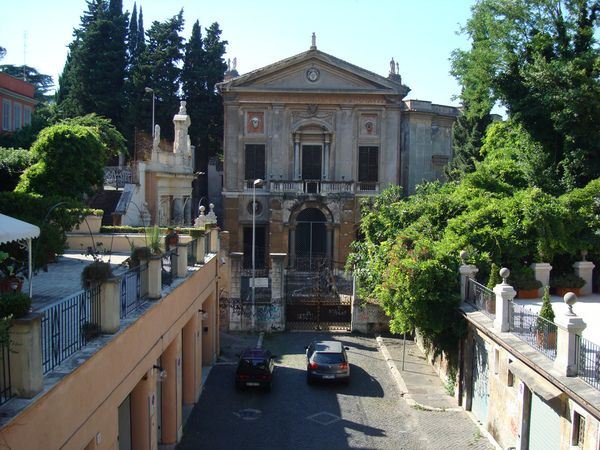