The RSPB Lodge Garden, east of Sandy, has terraces, has an Arts and Crafts style garden with a terrace facing the reserve. There is a canal and a walled garden that have interesting adaptations to support more wild life.

The Lodge itself, which is now the headquarters of the Royal Society for the Protection of Birds, the RSBP, was built  in 1870. The client was the son of Sir Robert Peel, a former Prime Minister and the father of Britain's police force. The designer was the 'Tudorbethan' architect Henry Clutton. The garden had a typically Victorian layout with lawns, specimen trees and shrubs. In 1934 the Lodge was bought by the chairman of the London Brick Company Sir Malcolm Stewart and he commissioned an Arts and Crafts garden. The council valuer described it as follows 'Very well laid out grounds' a 'pretty terrace in front of house' a 'good walled kitchen garden', 'a tennis lawn' and 'a nice approach drive through rough bracken and trees'. One can imagine him holding tennis parties of the kind painted by Arthur Melville 1889. The RSBP bought the Lodge in 1961 and made the estate into a very well managed  nature reserve. In the their words 'The woodland, heath and acid grassland along the Greensand Ridge cover 180 hectares, and are being restored to form the largest stretch of heathland in Bedfordshire.' The Lodge Garden remains an example of the Arts and Crafts style garden but is also being managed as a wildlife garden.

Just two gardeners provide the necessary love and care for the gardens at The Lodge today.It is the policy of the RSPB to maintain these gardens in a manner befitting their character and historical importance. All management methods are organically based and in accordance with the Society's conservation policies, no peat is used.

The RSPB Lodge Garden was designed in the Arts and Crafts Style and is becoming a wildlife garden (© Gardenvisit.com) 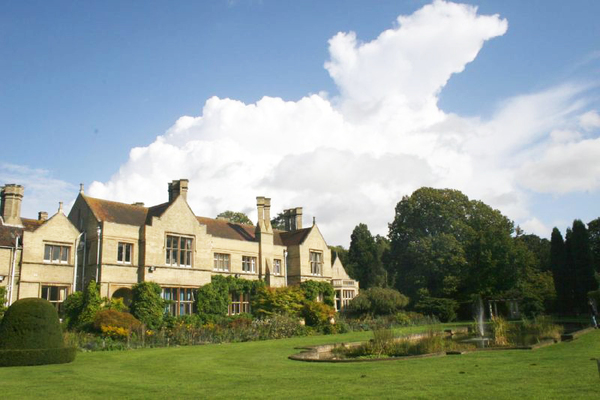 The formal gardens surrounding The Lodge today are largely the product of Sir 'Percy' Malcolm Stewart's period of ownership which began in 1934. They follow a simple Italiante style with features such as a swimming pool, rose garden, water garden and pergolas. The original Victorian-style garden, created in the 1870s for Arthur Wellesley Peel, consisted mainly of trees and lawns.