There is a nineteenth century garden within the castle but the historically interesting feature is the renaissance King's Knot which can be seen from the ramparts (visible if you zoom in on the satellite image on the location map below). It was described as new in 1502 and is set apart from the castle. Obviously, it could be used only in peaceful times. The earthworks survive, though they were modified in the nineteenth century and are now unplanted. John Harvey commnets that the parterres 'though repeatedly reformed, do occupy the site of a great garden which was probably laid out by James I soon after 1424, in imitation of the King's Garden below Windsor Castle where he had first seen his queen'. (p. 142 Medieval Gardens)

The octagonal mound or knot, was probably laid out in 1627-8 by William Watts. He was described as a 'skilful and well-experimented' gardener' and had come from  England to supervise the royal gardens of Stirling and elsewhere. The existence of royal gardens beneath the walls of Stirling Castle is first recorded at the beginning of the sixteenth century. They occupied part of the old Kings Park, which was enclosed by William the Lion at the end of the twelfth century. 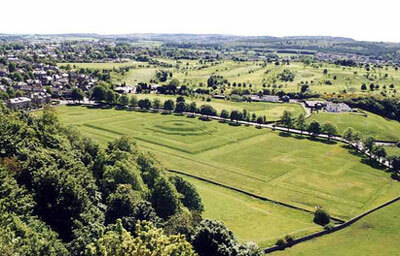