Orchha, founded in 1531, was the capital city of the Bundelas. Orchha means 'hidden place' and the main palaces (mahals) are 'hidden' on a fortified island in the River Betwa. The earlier palaces (Raj Mahal and Jehangir Mahal) have a defensive character with towering buildings around paved internal chowks. One has to bring an image of bustling life from the town to make sense of their character when occupied. The Shish Mahal, now a hotel and restaurant, has a more familiar palace layout, overlooking an external court once used for ceremonials. The Raj Praveen Mahal is a small palace designed in conjunction with a tree garden. An intricate water system brought water from the river and distributed it to a network of octagonal planting beds. Its irrigation system is not unlike that of the court of the Great Mosque in Cordoba, Spain. There are two gardens in the in the village, west of the island. The Palki Mahal (named after its palanquin roof) has wind towers and a walled garden. The Phool Bagh was a luxuruious charbagh, made for a favourit concubine, and now with a Hindu shrine in the centre of an intricate but neglected garden.  The Ram Raja Temple was originally a palace. Orchha's greatest spectacle is the river landscape of deep flowing water, a causeway bridge, great boulders, sandy islands, woods, bathing ghats, temple chhatris and palaces. 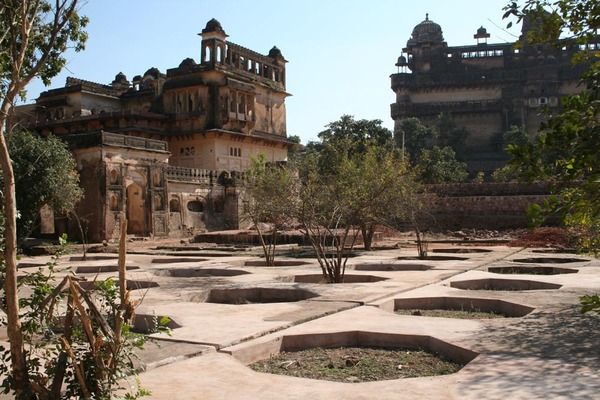 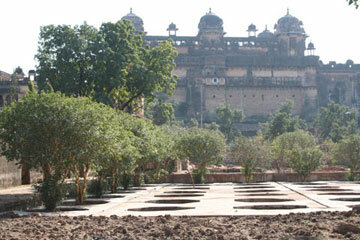 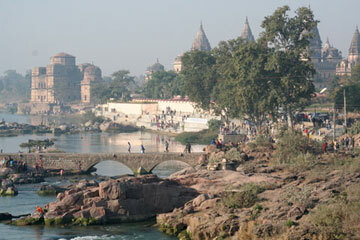