Easton Walled Gardens were abandoned from 1951 when Easton Hall was demolished. Renovation work on the 12 acres of gardens started in 2002. There is a Yew Tunnel, Cut Flower Garden, Cottage Garden, Turf Maze and two glasshouses. President Franklin Roosevelt described this garden as...'A dream of Nirvana..almost too good to be true.' The garden is as interesting for the planting as its long history.

A 400-year-old, 12 acre garden set in the heart of Lincolnshire. Easton Hall, the original house, was demolished in 1951 and the 400 year old garden was abandoned and fell into total disrepair. Since 2001, Ursula and Fred Cholmeley have restored this ancient garden from an overgrown wilderness to the nationally important garden it once was.
The restoration continues year on year with innovative new planting schemes blending into a timeless English landscape. It currently includes herbaceous borders, roses, sweet peas, spring bulbs and shrubs, cutflower and vegetable gardens set off by limestone buildings and surrounded by beautiful parkland. Highlights include Snowdrop Week and spring bulbs, Sweet Pea Week and David Austin Roses.
We have created meadow areas that increase in diversity every year as it is intended that this should be a garden that works for humans and wildlife. The Cedar Meadow is filled with spring bulbs from mid-January to early June. The terraces and rose meadows are rich with summer flowers and finally we have two tiny meadows by the history room filled with crocuses and spring bulbs.
The emphasis is firmly on horticulture although the cakes and lunches are pretty good too! The gift shop sells products carefully chosen to include some pieces from local artists and the courtyard has a good variety of plants for sale. Venue hire is available and can cater for large parties and corporate meetings in the sensitively restored Coach House and for smaller parties of up to 6 people in the luxury cedar lodge, The Meadow Retreat. We run a variety of workshops throughout the season and host other special events such as the Autumn Country Market, Teddy Bear’s Picnic and Dog Days. All of this is further complimented by our online shop. 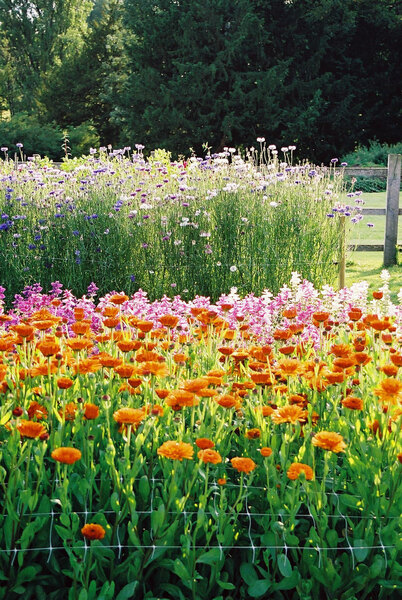 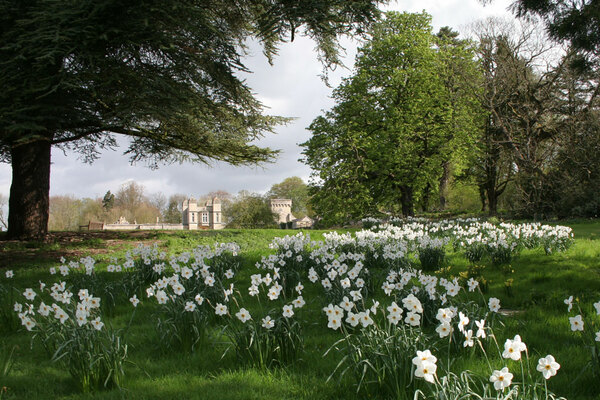 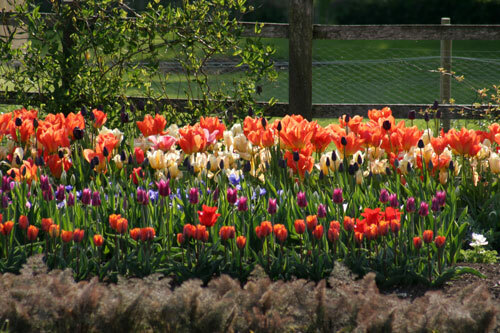 History of the Gardens
The name Easton is late anglo-saxon and means 'Enclosure to the East.' By the time the settlement was recorded in the domesday book it had roughly 100 residents (as it still does today.)

The family connection began in 1592 towards the end of the reign of Elizabeth I, when Sir Henry Cholmeley (1562-1620) bought the manor of Easton. The ancient conveyance - written on parchment - mentions orchards, meadows and gardens. There are surviving walks and walls that are clearly created in the tudor style so the written and archaeological evidence means we can confidently say the gardens are at least 400 years old. They cover 12 acres of a beautiful valley just off the A1.

In 1805, the gardens chief claim to notice was that they were 'ancient.' The house was altered and enlarged by Sir Montague Cholmeley, first baronet (1772-1831). He took down the West Wing, which was reputed to be the oldest part of the Hall, and rebuilt it, together with the central part of the house. Much of this house was replaced by early Victorian additions by another Sir Montague, second baronet (1802-1874) and this is the house that can be seen in the photographs on this page. The Hall was described in 1872 as ‘large and handsome, with large and elegantly furnished apartments, containing many valuable paintings and other works of art’. The entrance hall was galleried and hung with suits of armour.

The gardens felt the full force of 19th century garden fashions. Fortunately for us, all things Tudorbethan were fashionable again so the park was laid out around the old walls and terraces were preserved with Victorian additions. Bedding and borders dominated the foreground and new trees from the empire were planted. The original layout of the walled gardens survived as a highly unusual pair of kitchen gardens.

In the 1900s, the gardens had been photographed for Country Life and the future President Franklin D Roosevelt had fallen in love with Easton. Visiting as a family friend and then as part of his honeymoon, he described it as 'a dream of Nirvana...almost too good to be true.'

Easton Hall was requisitioned at the start of the Second World War. It became home to units of the Royal Artillery and and of the 2nd Battalion, The Parachute Regiment (of Arnhem fame) for four years. During their stay, it suffered considerable damage both to the fabric of the building and to the remaining contents, including many family records. Home to the Cholmeley family for nearly 400 years, in 1951 the Hall was demolished, never having been lived in as a family home again.

The Revival
By the mid-1990's every building was on the highest level of the at-risk register. Walls were collapsing, roofs had fallen in and water was getting in to every structure. Trees grew from the tops of buildings and brambles swamped the footings. We had lost the vinehouse and walls around the second walled garden (now the pickery, vegetable and cottage gardens) and the peach house had collapsed.

In late 2001, I went out into the gardens with a notebook and loppers. There is no other way to describe starting on such a monster project. Lists were pointless as there was no budget: friends and family helped out, hacking at undergrowth just to see the path. Gradually the site became safe enough to invite visitors to wander around a large area filled with roped-off corners and signs that read 'Danger: loose masonry'.

Heavy machinery joined the work. Large trailers from the farm were filled with roots and elder trees, a 24 tonne excavator came for a week driven by a man who loved the adrenalin rush of working at a 45 degree angle and the terraces began to appear - beaten but still recognisable.

Over the next few years it became possible to make lists and draw up a plan. By mid-2000s, we finally had planning permission to create a tourist attraction (3 1/2 years after we started the process!) and our first regular visitors followed.

Over the last five years, the gardens have been transformed from a work in progress to a working garden. The orchard of locally grafted trees is now fruiting, the meadows hold orchids and 20,000 bulbs flourish in Spring.

They say a garden is never finished and the same is true of historic environments. We are now repairing the bridge and greenhouses all over again but our visitors' enthusiasm and kind comments keep us going especially when it pours with rain!