A dissenters burial ground which was established in 1685 and taken over by the City of London as a public open space in 1867. It contains monuments to Bunyan, Defoe and Samuel Wesley. The cemetery was damaged during the war and reconstructed in 1960 to a design by Sir Peter Shepheard. It is a relaxed and well mannered place with quiet walks and sitting spaces, good paving and choice planting.

Bunhill Fields Burial Ground provides a valuable oasis of greenery in a highly urban area. It contains grassland and shrubbery along with fine mature trees which harbour birds and bats. Its value for biodiversity is indicated by its designation as a Site of Borough Importance for Nature Conservation. 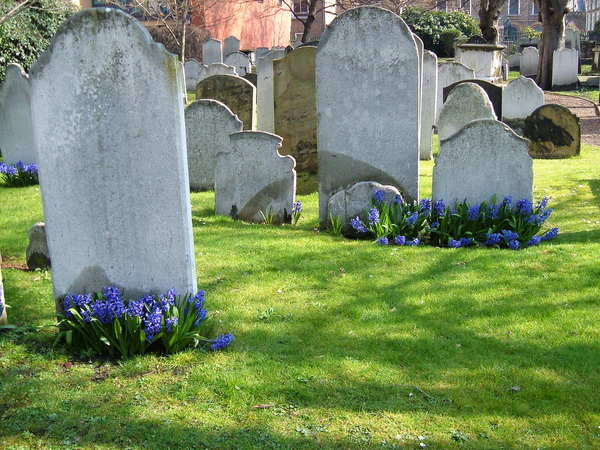 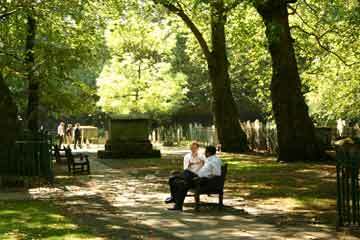 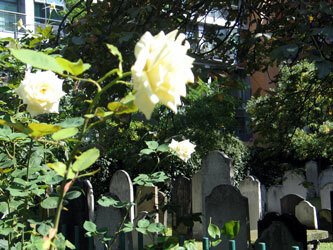 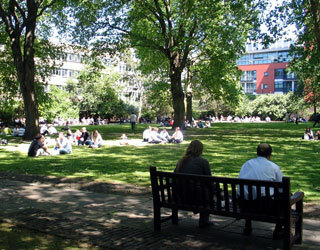 Bunhill Fields is a former Dissenters' burial ground of four hectares, bounded by City Road to the east and Bunhill Row to the west. Today the area is an oasis of calm and greenery, which has been managed as a public open space by the City of London since 1867.

The site has a long history as a burial ground, but is most significant for its Nonconformist connections, dating from the 17th, 18th and 19th centuries, and the burial of prominent people including William Blake, Daniel Defoe, John Bunyan and Susannah Wesley. The historic significance of the burial ground is recognised by its designation as a Grade II Listed Building as part of the Bunhill Fields Burial Ground and Finsbury Square Conservation Area.

The graveyard is well stocked with around 130 trees including, London plane (Platanus x hispanica trees), oaks and limes, together with a golden-barked ash, a black mulberry and a June-flowering winter bark tree, Drymis winteri, from South America. The dominant pattern of tree planting began in the 1870s when the burial ground was laid out with avenues of plane trees. The trees provide cover for birds including great tit, blue tit, wren, robin and feral and wood pigeons. It is of note that a pair of spotted flycatchers (a UK Biodiversity Action Plan priority species) is also reported as breeding on site.

During the spring, swathes of crocuses surround the bases of the trees on the north lawn, while in the grass surrounding the graves to the south can be found snowdrops, crocuses, daffodils and hyacinths

The memorials, together with the shade provided by the tree cover, provide suitable habitat and micro-climate conditions for lichens, bryophytes and ferns.