Akbar's fort was positioned by the River Jamna, and was a garden as well as a fortress. The two ladies palaces (zenana) called the Jahangiri Mahal and Akbari Mahal have paved internal courts rather than planted gardens. The Jahangiri Mahal has a a water channel connecting with an octagonal pool. The Anguri Bagh was rebuilt by Shah Jahan by 1637 and has raised walks leading to a platform for a central pavilion. The plan of Arga was typical of Islamic cities: a citadel on the edge of a fortified enclosure (which could be used to grow food in times of siege) adjoining a walled town. Mughal kings, who wanted both luxury and safety, were disliked by their Hindu subjects. At Agra the fortified enclosure is now used by the army and is not accessible to the public. Though managed as gardens, none of the green spaces within the fort retain their original horticultural character. The layout and construction is in better condition. Garden restoration work should be considered. See plan of Agra Fort and the Fish Square. The second part of this video shows an aerial view of Agra Fort (the opening sequence is the tomb garden of Itmad Ud Daula). 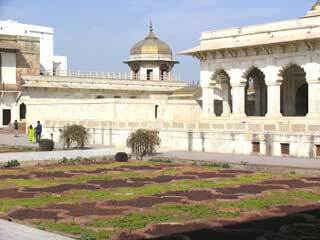 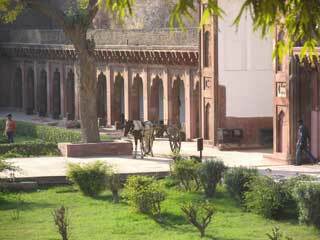