The gardens of South Somerset are of exceptional design interest. Hestercombe House Gardens is one of the best Jekyll-Lutyens open to the public on a regular basis; Montacute House Garden has the finest Elizabethan garden buildings in England; East Lambrook Manor Garden was made by a famous expert on shade gardening; Tintinhull House Garden was planted by a leading writer on colour planning in garden design.

Hestercombe House Gardens » An eighteenth century park with a nineteenth century house, by E W Portman, and a great twentieth century garden. The landscape park has lakes, temples and woods. The Arts and Crafts garden, by Edwin Lutyens and Gertrude Jekyll has a sunken parterre, a water garden and a large pergola on the garden boundary. The Oxford Companion to Gardens observes that 'Hestercombe is remarkable for the bold, concise pattern of its layout, and for the minute attention to detail everywhere to be seen in the variety and imaginative handling of contrasting materials, whether cobble, tile, flint, or thinly coursed local stone'. Gertrude Jekyll's planting was restored from the old plans. Read more on Hestercombe House Gardens

Montacute House Garden » A grand Elizabethan mansion house with what used to be described as an 'Elizabethan garden'. Roy Strong corrected this opinion, decisively, in his 1979 The renaissance garden in England, stating that 'nothing could be more misleading' than to regard Montacute as an Elizabethan garden: 'Alas for Triggs and Tipping the famous north garden which we see today was laid out in the 1840s; the pond in the centre was added in the nineties. Conceivably the banking and terracing might have been Elizabethan but what may have been a mount in the middle was demolished for the fountain'. The beautiful corner pavilions are, however, Elizabethan, as is the long terrace. Read more on Montacute House Garden 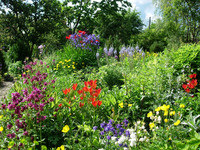 Tintinhull House Garden » A seventeenth century house with a Arts and Crafts garden. The Eagle Court is thought to have been made in the eighteenth century but the other garden compartments were made in the first two decades of the twentieth century. It has a distinct 'Golden Afternoon' flavour. Captain and Mrs Reiss bought the house in 1933 and added the Pool Garden as a memorial to a nephew who was shot down over a Malta convoy during the Second World War. Penelope Hobhouse, author of Colour in Your Garden (1984) worked here from 1980 to 1993 and the garden is described by her in Penelope Hobhouse on Gardening (1994). The standard of the planting design is not now as good as in the photographs in her book. Read more on Tintinhull House Garden