Bodysgallen Hall is a 17th-century country house with 200 acres of meticulously restored formal gardens, farm and parkland with magnificent views over the Snowdonia range and Conwy Castle. The hotel is just 2 miles from the coast. It seems likely that Bodysgallen Hall was built as a watchtower for Conwy Castle to guard the low-lying castle against suprise attack. Bodysgallen is situated on high ground on a peninsular facing south, with a series of descending terraces which have been carved out of the hillside. The house stands alone beside a broad stone pine with mottled bark and large pine cones, and the stone walls of the house are skirted with Cotoneaster microphyllus. The garden at Bodysgallen is well known for its 17th century box hedged parterre, which is colourfully planted with herbs. The lower gardens are surrounded by high stone walls, the largest of which encloses the rose garden, with a courtyard and lily pond at its upper level. Outside the walled garden is a cascade which tumbles down the rocks, overshadowed by two large yew trees and crossed by narrow paths which lead back to the walled rose garden. The similarly enclosed kitchen garden has espalier-trained fruit trees hedging off the cut flower area, and walls are covered in wine berry and Chinese gooseberry. A slope covered in a hebe and rock rose collection, with a path lined in variegated Weigela florida and Saxifraga umbrosa, rises to the start of the Woodland Walk. This ancient natural wood is the site of the 18th century Ladies Terrace with views of Conwy Castle and the river valley. The woodland with its large Oak, Beech and Ash trees has been designated as a Site of Special Scientific Interest. Other trees at Bodysgallen Hall include a 200 year old Stone Pine, a Handkerchief Tree, a Medlar and Cornus Controversa Variegata. The terrace shows off specimens of the rare native service tree and a massive chestnut. The walk through the woods continues to an uphill zig-zag path, leading to a fortified folly from which the elegant obelisk on Bodysgallen's highest point can be seen.Gardens to visit while staying at Bodysgallen Hall Hotel include Bodnant Garden (5 miles), Penrhyn Castle Garden (16 miles) and Plas Newydd (21 miles). 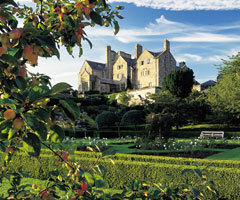 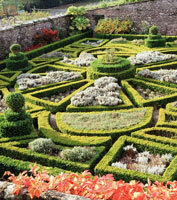