Traquair claims to be the oldest continuously occupied house in Scotland. The name comes from Celtic words meaning dwelling (tre) and winding stream (quair). Originally a hunting tower, it became a castle and then a noble residence. Mary Queen of Scots visited in 1566 with her with her husband and son, who became James VI of Scotland and James I of England. The family supported the Jacobites and the Bear Gates were built at the end of an avenue in 1738. They were closed Bonnie Prince Charlie’s visit in 1745 and the Earl of Traquair vowed they would not be re-opened again until a Stuart king was crowned.

The Traquair garden has a seventeenth century character with an avenue, a gated enclosure in front of the house. The site of a parterre lies behind the house and is now occupied by a maze, designed by an estate worker in 1981. The maze was planted with Cupressus Leylandii. Most of it died in the hard winter of 1983 and the maze was re-planted with beech. There is a Victorian area beside the house with a Cupid Garden, a collection of specimen trees and an interesting heather hut, built in 1834. The old walled garden has orchard trees, amongst which picnic tables are now set, but the great vegetable garden has gone.

The most interesting aspect of Traquair is its 'Auld Scots' character. It remains one of the best places to see the influence of renaissance garden ideas in Scotland and, from this point of view, one can regret the nineteenth and twentieth century changes - because there are so many better examples of these design ideas elsewhere.

The house and garden at Tarquair may have inspired Sir Walter Scott's description of the Bradwardine Garden of Tully-Veolan. 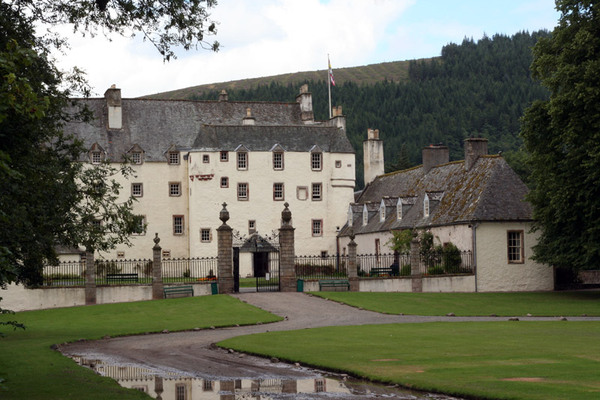 The enclosed courtyard in front of Traquair House. (Photo Gardenvisit.com) 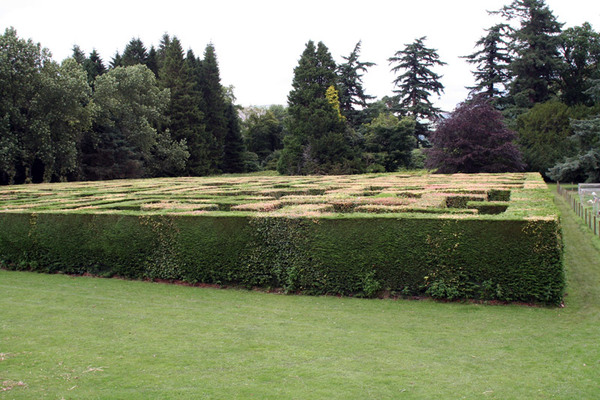 The 1981 maze at Traquair, on the site of the old parterre (Photo Gardenvisit.com)

May to October. Daily. Also open weekends in April and November.