A 14 hectare park built 2009-10 beside the Huangpu River, by Kongjian Yu of Turenscape. The land was a steel factory and a shipyard. It was made into a park for the 2010 Expo and also had the roles of becoming a public open space and a flood defense. The old flood wall was 'rigid and lifeless'. The ecological aim was to re-geneate the waterfront as a wetland habitat. The terracing was inspired by traditional Chinese rice terracing. The planting highlights the seasons: golden blossom in the spring, sunflowers in summer, rice in the autumn, green clover in winter. Reclaimed steel panels remember the site's industrial history. Platforms and ‘containers’ are used as nodes on the pedestrian network, which passes through groves of bamboo and Chinese redwood trees. The whole project is viewed as an investment in ecological infrastructure. 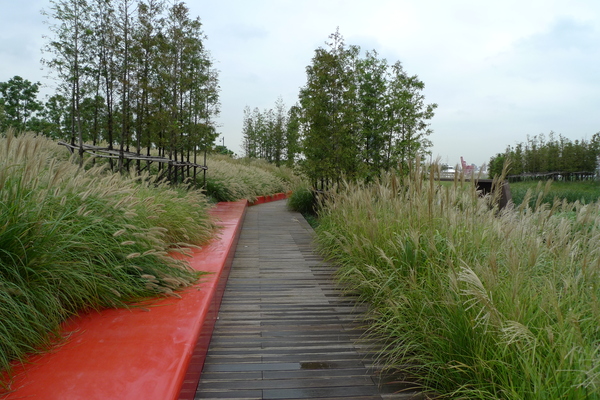