Set in open country with gently rolling hills, Old Gorhambury is the remains of an impressive Elizabethan mansion, which belonged to Sir Francis Bacon. See Biography of Francis Bacon and Francis Bacon's Essay Of Gardens.

Roy Strong writes (in the Renaissance garden in England, 1998, p127) that 'John Aubrey saw Bacon's garden at Gorhambury in 1656... But it was the ponds which struck Aubrey most of all. He guessed that they covered no less than four acres and that, as at Hatfield, the bottoms were lined with coloured pebbles carefully selected by Bacon. "In the middle of the middlemost pont", he wrote, "in the Island, is a curious banquetting-house of Roman architecture, paved with black and white marble; covered with Cornish slatts, and neatly wainscotted"'. Sir Francis Bacon's Water Gardens are 1.5km from Old Gorhambury House. 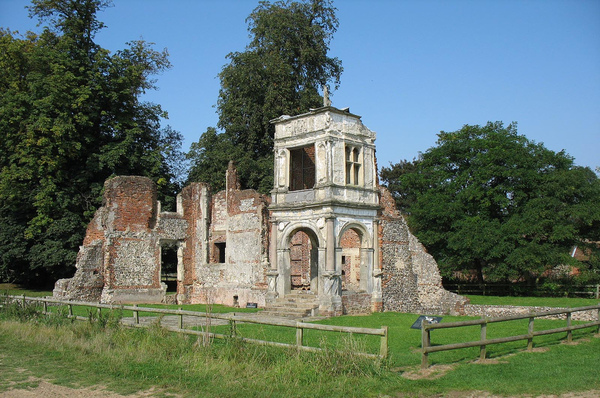 All year except 1st June.