George Washington, America's First President, took a great interest in the layout and management of his family estate. The house, built in 1743, is set on a rise overlooking the Potomac. The design makes use of axial lines, inspired by baroque ideas, but Washington owned a copy of Batty Langley's New Principles of Gardening and was influenced by the Augustan Style. He designed a serpentine bowling green in front of the house with geometrical gardens to the east and west. Throughout his public life Washington dreamed of rural retirement to his ferme ornee on the Potomac. His family came from Sulgrave Manor in England. The formal flower garden or "upper garden" has been restored to reflect George Washington's design and features varieties of heritage flowers mentioned by visitors and by Washington's gardeners in their weekly work reports. Flowers in the garden include larkspur, foxglove, crown imperial, cardinal flower, jasmine and guelder roses. The English boxwood, which borders the beds, is original and has far outgrown the low, "neat" border that Washington intended. Two boxwood parterres have been re-created with the French fleur-de-lis design that Washington admired. The Lower Garden or kitchen garden, likely managed by Martha Washington, yielded most of the fresh vegetables and herbs used by the Mount Vernon household. The plan for the restored lower garden was derived from the same books on gardening that were owned and studied by Washington. In Washington's own words, "tell the gardener I shall expect everything that a Garden ought to produce, in the most ample manner." 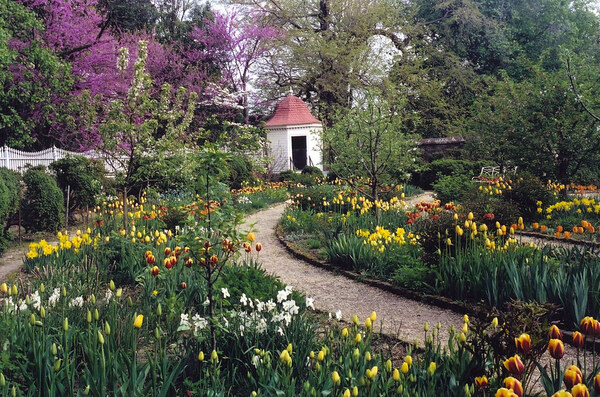 All year, Daily, Open 8am to 5pm April through August, Open 9am to 5pm March and September, Open 9am to 4pm November through February