Lindertis House  belonged to Gilbert Laing Meason, who published a book on The landscape architecture of the great paintings of Italy (1828) and died in Venice in 1833. The mansion has been demolished. The house was designed by Archibald Elliot of Edinburgh (1760-1823). The site is not open to the public but can be seen from the road.

'Lindertis House was almost entirely rebuilt, in 1813, by the late proprietor, Mr  Laing Meason, from a design by Elliot of Edinburgh, in the castellated style. It is well wooded, and finely situated, commanding an extensive view of the richest part of Strathmore.' Mr. Gilbert Laing Meason, of Lindertis, originally Mr. Gilbert Laing, who assumed the name of Meason on succeeding to the estates of Mr. Gilbert Meason, of Moredon. Mr. Gilbert Laing Meason was the brother of Mr. Malcolm Laing, the historian of Scotland, and of Mr. Samuel Laing, Senior, the author of Travels in Norv:ay and Sweden,  and by consequence, Mr. Robert Laing Meason is a cousin of Mr. Samuel Laing, the Financial Minister of India. I was told that he had gone toNorway to reside, and that he had been writing poems in the Norwegian language. Sir Thomas Munro, Bart. of Lindertis, Angus, an officer in the army—son of Major-General Sir Thomas Munro, K.C.B., Governor of Madras. He purchased the estate from the creditors of G. L. Meason, or his son, about 1846. The name Munro was later given to mountains in Scotland with a height over 3,000 ft (914.4 m). They are named after Sir Hugh Munro of Lindertis, 4th Baronet (1856–1919), who produced the first list of such hills, known as Munros Tables, in 1891.

Views of the seats of noblemen and gentlemen, in England, Wales ..., Volume 1  By John Preston Neale, Thomas Moule (1822)THE SEAT OF GILBERT LAING MEASON, ESQ.

This Mansion is situated on the rising ground, which forms the northern boundary of the fertile and beautiful Vale of Strathmore, seventy miles west of the county town, Forfar. The building, lately erected under the direction of Mr. Archibald Elliot, is a commodious family House; the material is free stone, that abounds in the Valley. The interior is finished in a handsome, but not florid, Gothic style. In the Ground Floor is comprised the living Rooms, consisting of a Dining Room, 30 feet long, by 21 feet broad; Library, 27 by 24; two Drawing Rooms, 30 by 21, and 21 by 16 feet. These Rooms are well connected, and form the east and west sides, and south front of the building. The Dining Room has a groined ceiling, those of the other Rooms have spandril fans in the corners, and a corresponding drop in the centre. The Gothic Staircase Hall, in particular, does great credit to the taste of the Architect.

The grounds are extensive, and the House, placed on an elevated situation, commands fine views of the Vale, yet is well sheltered by the extended woods to the north, west, and east. The approach to the House from the west, is carried in a direct line, for upwards of a mile, along a closely wooded bank. The approach from the south, winds through an open grove of nearly the same length. The whole domain has the advantage of being well sheltered from the cold northern winds, that sometimes blow from the elevated range of mountains called the Grampians. It is no trifling encouragement to the planters of Larchwood, to be informed, that the greater part of the wood employed in this Mansion is of that Fir, thinned out of the surrounding woods, and planted not more than forty-five years ago. The larchwood on this Estate thrives alike well on good deep arable land, on a dry rocky bank of freestone, on cool moorish ground, and on a gravelly soil. In the neighbourhood of Lindertis, are many interesting objects to the admirers of picturesque scenery: such as the grand fall of the river Isla, or the Reekie Lynn; the tremendous chasm, through which the Isla rushes, called the Slough of Auchraimie; the castle of Airley, a romantic seat of the Earl of Airley; and the venereble castle of Glammis, belonging to the Earl of Strathmore, whose extensive and well managed woods adorn tbe Vale.

Strathmore, or tbe great Vale, is one of tbe most fertile districts in Scotland, extending above 30 miles in length, and 7 miles in breadth. There is no part in the kingdom, in which the drilled turnip culture is carried on in greater perfection, and consequently the winter stall feeding of Cattle. The farms are large, the farm-buildings of tbe most approved and commodious arrangements, and the country in general well enclosed and wooded. For beauty, the Vale is deficient alone in a fine river or lake ; as its only stream is the Dean river, of no size, which flows through the Vale from the lake of Forfar, till it joins the river Isla. 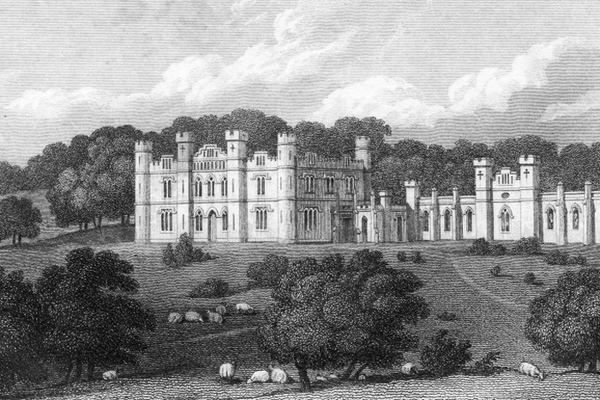 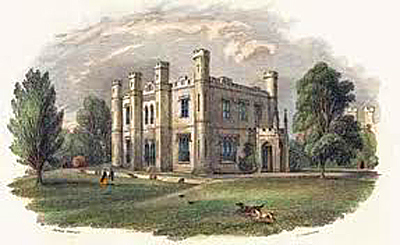 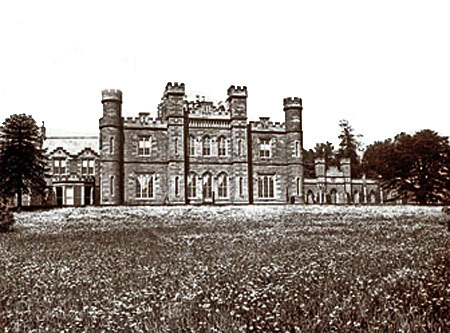