A large fourteenth/seventeenth century castle with an eighteenth century park and a nineteenth century 'Italian' garden. The Glamis Castle garden has yew hedges, herbaceous borders, fountains, gazebos, statues and a sundial. The castle is approached by a mile long avenue, which is at its best when the daffodils are flowering in the spring. There is also a Pinetum with many native American trees that was created by the 13th Earl in 1870. The River Dean flows through the grounds. The avenue was planted in the eighteenth century as part of a scheme of radiating avenues. The pre-17th century castle had a courtyard which, in the eighteent century, was 'swept away and replaced by a baroque setting of courts, sculptures and vistas'.

The garden was described in 1869:  "The garden (which will take some time to complete) is of great extent, and laid out with much taste. Outside the south wall of the kitchen-garden is the flower-garden, occupying a gentle incline of several acres sloping down to the river Dean. Along the north wall extends one of the finest ranges of hothouses in Scotland, fitted up with every modern improvement. At the back of the north wall is a house for the rather unusual purpose in Scotland of forcing mushrooms. Outside the north-west corner is the dwelling-house of the head gardener. The sculptured stone monument of Cossans—one of the finest specimens of its kind—is to be seen in a field in the neighbourhood of Glamis."
* See Glamis; its History and Antiquities, by A. Jervise. A. and C. Black, 1861

A visitor to Glamis, in 1847, was pleased to see that the old avenue of lime trees had been re-planted:  "The approach to Glamis Castle, after passing the lodge gates, is through the spacious park, which gives a fine effect to the old fabric which stands at the end of a straight avenue of half a mile in length. This avenue appears to have been of lime-trees, but you see, as you advance, how much the park has been robbed of its old wood to pay the enormous debts incurred by a late lord. The fine old limes are gone, and their place is supplied by younger ones, till you get within a few hundred yards of the end. Hero the full-grown, noble limes were not only remaining, but in full flower. Imagine the difference of date from their flowering-time in the south. A month before, when I left London, their blossoms were over that neighborhood—here, on the 20th of August, they were in full efflorescence, and diffusing their odor far and wide."

A visitor to Glamis, in 1722, wrote that "Travelling eastward from Cowpar of Angus, we came to Glamis, a small town on the road leading to Forsar,)and near it is the noble seat of the Earl of Strathmore, one of the best gothic structures in Scotland. It is situated in the middle of a fine park, with an avenue before it half a mile in length. The roof is adorned with many fine turrets, and spires, and before the great gate are some statues in armour. The whole is furnished in the most sumptuous manner, and many improvments are carrying on, which is not to be wondered at, when we consider that the present proprietor, has by his marriage acquired such a fortune that he is one of the richest subjects in Britain."

The Gardens and Grounds at Glamis, like the Castle, have centuries of history behind them and have been added to and altered by generations of the Strathmore family. Walks have been created to take in a mixture of habitats ranging from parkland and policies in the immediate vicinity of the castle to the formal Itlaian Garden. 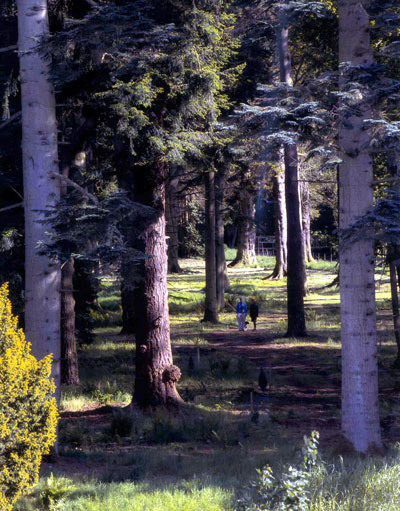 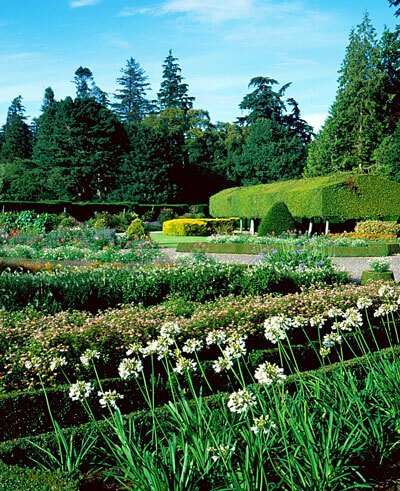 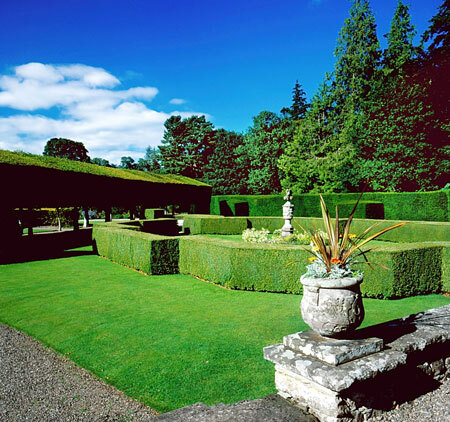 The Italian Garden was laid out by Countess Cecilia, the Queen Mother’s mother, c.1910 to designs by Arthur Castings. Bounded by yew hedges, this garden includes a raised terrace between two small gazebos, from which can be seen fan-shaped parterres of formal beds separated by gravel walks. Other features include pleached alleys of beech, a stone fountain and ornamental gates which commemorate the Queen Mother’s 80th birthday.

The Pinetum, planted by the 13th Earl c.1870, has a variety of exotic trees, many of which are conifers native to North America. Along the northern edge of the Pinetum lies the Water of Dean, which eventually joins the River Tay. This was canalised in the 18th century to improve the drainage from the surrounding farmland. The burn is crossed by the Earl Michael Bridge, originally built in 1890, and reopened by the Queen Mother in 1996 after restoration by the 18th Earl.

For the plant lover there is an abundance of snowdrops, daffodils, dog's mercury, primrose, dog's tooth violet, crocus, butterbur, rhododendrons, azaleas. Native flowers such as foxgloves, thistles, and teasel have been planted as part of the on-going programme to preserve the natural habitat of the wildlife at Glamis.